This article first appeared in Pioneer Magazine, 2010 Vol.57 No.1 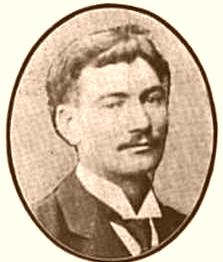 bryan ward peck was born July 27, 1877, in Thatcher, Idaho, to Hezekiah Hatch Peck and Mary Susannah Nowlin. Bryan came from a large family of 11 children. His grandfather, Martin Horton Peck, was among the first members of the Church who was called on several missions and performed many healings for members of his family and others. Bryan Ward Peck’s mother’s family originally came from tennessee. [Elder Peck was] called to the southern states mission [and] all of what we know about his experiences as a missionary in Tennessee are taken from letters. . . . The earliest of Elder Peck’s letters is dated 21 June 1889, written a short time after he arrived in Tennessee.

In that letter, he wrote that he had experienced some delay and confusion upon his arrival, before the days of smooth transfers and convenient transportation:

“We left to go to our field of labor and got this far and did not meet the elders as we expected. Elder Decker has got to go with me to find our companions. We expect to walk 10 miles to where they have been laboring.”

He soon found his companion and wrote a few days later:

Later they met one of the few Saints in Tennessee, “and when he invited us to go to his house and spend the night with him, you can bet we accepted the invitation with gladful hearts.”

Bryan apparently had a difficult time adjusting to the heat and humidity of the South. He says in that same letter, “It is awful hot, about 90 degrees my clothes are wet with sweat every day but that does not matter for it’s an Elder’s life for me with its trials and trouble and dinners free.”

On August 12, 1899, Elder Peck wrote his observations regarding the religious conditions of the people in the area.

“Well, if you could just see some of these churches here and how they are conducted. Everyone has his own ideas in regards to what is right, so that there is no one who knows what the whole church does believe in. About every tenth man is a preacher and presents a different road to heaven so there is a road for all. If one does not suit you, you can find one that does.”

The next letter, written September 9, 1899, finds Elder Peck still suffering from the heat, and from strange ideas about Mormons. He wrote:

“We are having a hot time. If you do not think so, you had better come and walk 16 miles in the sun when it is 104 degrees in the shade. It has been up to 119 in the shade. We are accused of baptizing a lady and telling her man that she is as much our wife as she is his, but that is not so, as we have not baptized any lady at all yet, so you can see what we are thought of in here.”

“We thought he [Elder Peck] was such a good boy, he seemed like home folks to us. [He] bore his sickness the best I ever saw and never complained. I would of been glad if he had come to our place sooner, thinking it would of been better for him. When he was first taken sick he was caught in a rain or two which of course made it worse for him. He called Elder Brimhall to the bed a few hours before he died and ask him what he thought of his case, and put his arms around the elder’s neck and told him that he looked like one of his brothers. From your sister in the Gospel, Lizzie Vaughn and daughter.”

Elder Peck’s mission was only a matter of months in duration, but he gave the ultimate sacrifice and remained faithful until the end. He died at age 23.