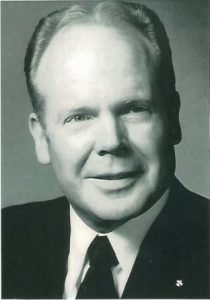 Dr. Orson D. Wright, beloved husband, father, grandfather and friend passed away on July 5 th , 2017 in Salt Lake City, Utah. One of the most rewarding was his service over 52 years as a member of the National Society of the Sons of the Utah Pioneers wherein he served as the National President in 1972-1973 and as President of the Past National Presidents for eleven years. As the Director of the SUP Pioneer Village in Salt Lake he managed the sale of the Village and its transfer to Lagoon in 1976. With the proceeds he was able to promote the building of the SUP headquarters office and Building at the mouth of Parleys canyon. He directed the placement of the Pioneer Memorial Monument (“All is Well”) at the Brigham Young grave site for the Church of Jesus Christ of Latter-Day Saints.

He was very active in Scouting. He served as high council member over scouting, district scouting leader, and vice president of GSL scout council. He attended Philmont ranch, received the Silver Beaver award, and served as president of the Silver Beavers. Being very active in the Church of Jesus Christ of Latter-Day Saints, he has served in many capacities as teacher, quorum leader, branch president, member of district presidency, bishopric member, bishop, high councilor, missionary, stake missions, mission president, SL temple ordinance worker, and temple square tour guide for 20 years. He shares his testimony of the truth of the Church of Jesus Christ of Latter Day Saints and its restoration.