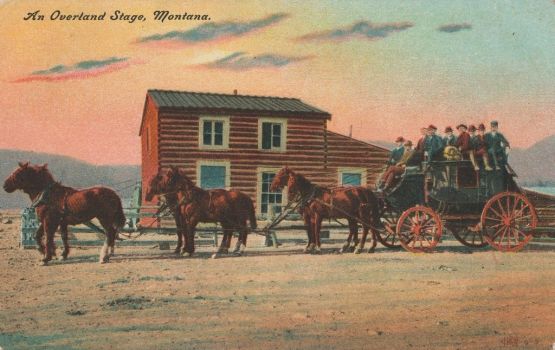 A rising demand for more adequate mail service and for passenger transportation to western goldfields in the early 1860’s brought the famed overland stage.  Ten years after James Marshall’s discovery of the California Eldorado, the Concord coaches, a picturesque Yankee invention, were sent speeding westward and eastward along the trails of the pioneers and the argonauts.  Teams of four or six brisk horses or little mules provided the motive power for these vehicles; while doughty drivers, proud of their expertness in handling the lines, kept the lively animals headed for the “relay” and the “home” stations scattered along the risky routes.

It was a stupendous undertaking in those days to set up and maintain a stage line over one, two or three thousand miles of rough and hostile regions between the Mississippi and the Pacific Ocean.  To lay out the line, build stations, marshal courageous and efficient drivers and station keepers, gather dependable animals, and maintain the service with regularity, required leadership of high order.

Frontier magnates who rose to the call, have their names vibrating through the epic story of the Overland Stage.  Outstanding among the many who played valiant parts in this drama of the West were:  john butterfield, trained in staging along the Mohawk Trail; george chorpenning, pioneer in western mail carrying; howard egan, desert trail blazer and superintendent of the line across Utah and Nevada; Russell, Major & Waddell, whose fortunes made in frontier freighting were swallowed up by the Pony Express and the Overland Stage; ben holladay, the dashing manager who “stream-lined” the frontier service; Henry Wells and William Fargo, business executives, who finally took over the lines and extended them until they became a transportation network over the West.

Heroic roles also were played by drivers, stock tenders and maintenance men who took on the hazardous work of running the stage, keeping the stations, and cooking the meals for the workers and passengers.

One of these drivers, hank monk of old Nevada, who was reputed to have given Horace Greeley a record ride along the winding trail across the high Sierras, had been lifted into the literary limelight by mark twain in his “Roughing It.”  That same book provides a closeup of Jack Slade, a station-keeper of the rough and tumble type who made his name ring all along the line.  Slade’s efficiency in handling the affairs of the stage company seemed never to be in question; he could deal with frontier bad men in a way that gave him notoriety and made him something of a terrorizing influence within his sphere of action. Slade, however, came to a tragic end when, during a drunken spree, he tried to run roughshod over the mining folk of Virginia City, Nevada.  Hailed before the vigilantes, he was promptly hanged.

Mark Twain’s historic ride over Overland Stage, provides a fairly accurate map of the route.  Mark’s party boarded the stage at St. Joseph.  The Missouri crossed they went spinning along over Kansas and were soon rolling up the little Blue River toward the Platte.  Camp Kearney was reached and soon left behind.  Old Fort McPherson, Julesburg and California Crossing provided change-stops and then on to Ash Hollow, Chimney Rock, Scott’s Bluff, Fort Laramie, Deer Creek Station, Independence Rock and through the South Pass. It was down the Pacific slope now, along the Little and Big Sandy Creeks, over the Green River and across some miles of badlands and on to old Fort Bridger.

Utah’s Echo Canyon next resounded to the rumble of whirling wheels, tattoo of hoofs and shouts of passengers.  Over the big ridge of the Wasatch Mountains and down another colorful gorge to a refreshing oasis—the Valley of the Great Salt Lake.  After a brief stay in this pleasant place the coach rolled again, westward across the Jordan River to Camp Floyd, now abandoned by Johnston’s Army, but still a relay station for the Pony Express.

The rest of the stretch of some 500 miles that lay between the eastern edge of the Utah desert and the new capital of Nevada Territory, was a series of rugged mountain ranges and valleys.  Mark described this stint as “miles of bottomless sand, vast areas of still, desert space.”  Carson City hove into view after many rough and bumpy days.  The old pioneer reporter complained more about the “powdery alkali dust” than the bumpy ride.

Last stretch of the old trail included Genoa, blue Lake Tahoe through “Hangtown” or Placerville and finally to Sacramento, the western terminus of the Overland Stage.

Indian troubles caused various changes in this route from time to time as the Sioux and allied tribes took the war path along the Oregon Trail across what is now Wyoming, making it a dangerous stretch for passengers and the mail.  A stirring bit of Overland Stage adventure occurred near Eight-Mile Pass just over the Utah line in Nevada.  Here, two station keepers were killed and the incoming coach from the west was ambushed. Judge Mott, newly-elected delegate to Congress from Nevada was a passenger and when the driver was shot, he seized the lines and kept the team going at break-neck speed on to Deep Creek station.  Two passengers were wounded and one survived serious head injuries from a bullet.

All through the Civil War period the Indian attacks continued with many fatalities.  Thousands of Indians of various tribes, resentful of the intrusion of the whites on their life-giving hunting grounds, wandered over the vast region of open plains, mountains and deserts.  To keep these hostile tribes from attacking and killing was one of the major projects of the Overland Stage, an endeavor that provided much of the heroics of this adventurous, colorful and spectacular phase of western history.