Iosepa, (in Tooele County) is a ranch in central Skull Valley. This name is not Indian (Gosiute) though the terminal pa could easily mislead as the familiar Shoshoni suffix for “water.” Iosepa is a modified Hawaiian version of the Christian name Joseph. Late in the 19th century the Mormon Church sponsored the immigration of a group of Hawaiians and attempted to settle the colony in Skull Valley.

The site was named for Joseph F. Smith who was a missionary in Hawaii; later he was the President of the Church. The settlement was a failure.

Iron City, (in Iron County) is a ghost town, the site of the ruins of an  ambitious pioneer industry, the second attempt to smelt iron ores at their source. iron city is on the banks of Little Pinto creek near the south base of Iron Mountain, 7,828 feet, a rich mass of magnetite and hematite ores in the Iron Range. The ruins comprise a well-preserved mammoth charcoal oven, blast furnace, primitive stone-lined pit for grinding ores and pretentious residence. Since coking coal had not been found for smelting the iron ore, large quantities of timber were reduced to charcoal in bee-hive shaped ovens.

Because of the lack of coking coal and the railroad bringing iron products from the east after 1869 the pioneer attempt to smelt iron ore was abandoned. Three-fourths of a century later in the early 1940’s the ore from the same Iron Mountain and other deposits in the Iron Range was transported 250 miles to the great government built blast furnace at Geneva, Utah.

Iron Mission, was organized under the leadership of George A. Smith to colonize and the attempt to smelt iron ore. This mission, comprised of 119 men, 310 women and 18 children, set forth from Great Salt Lake City, December 7, 1850, and arrived at the site of Parowan, January 13, 1851. Parowan was the first settlement south of Provo on the Mormon trail.

Promontory, (in Box Elder County) is or was a hamlet northwest of Brigham City in the low terrain between the north and south sections of Promontory Mountains. The south section is a long rocky peninsula, first named Promontory Point, jutting southward into Great Salt Lake west of Bear River Bay, The word promontory means a high rocky headland projecting into the sea. 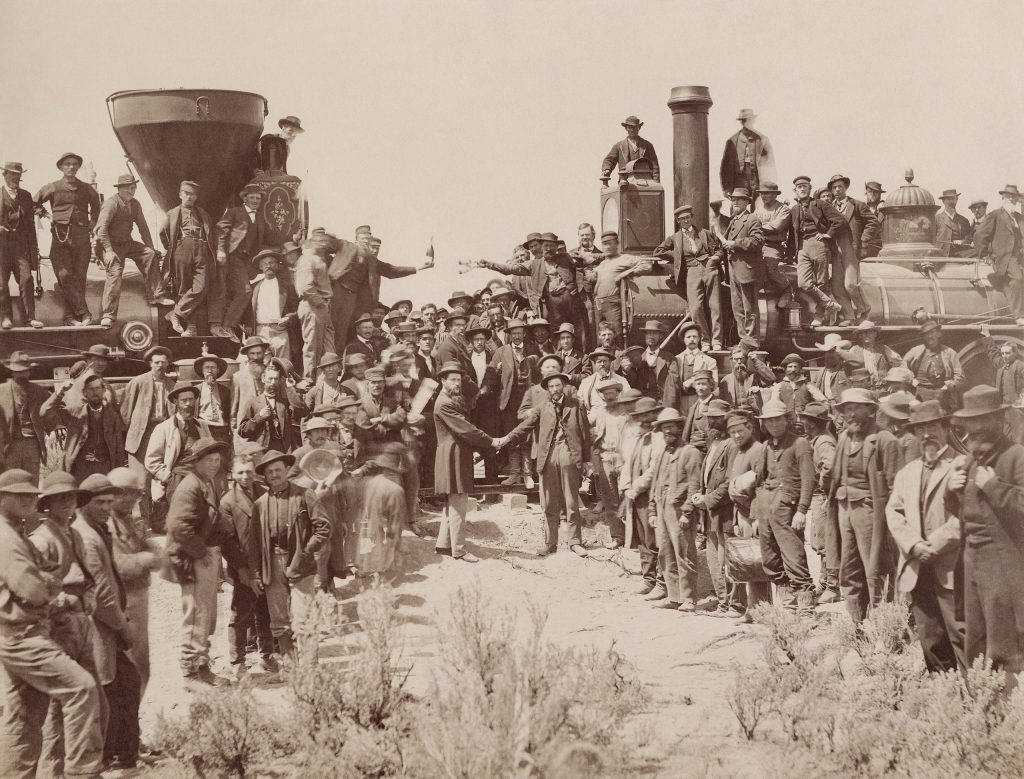 Near this hamlet is a marker marking the sight of the driving of the Gold Spike on May 10, 1869. This is now a National Monument and a visitors center has been erected there. Promontory Summit was the name specified by Congress as the location at which the railroads, the Union Pacific extending 1086 miles from the Missouri River and the Central Pacific, extending 690 miles from Sacramento were to join tracks. The name was shortened to Promontory in the Central Pacific timetable and was continued by the Southern Pacific until the tracks were torn up in 1942.

1 thought on “Origin of Names & Places in Utah”