October 24th found me out early doing farm chores before the area vice presidents training sessions. As darkness turned to dawn the sky to the east suddenly became a brilliant red and orange causing me to stop and look upon the beautiful sunrise. I knew this would be a good day with all that was planned. Even a frozen water system at the sheep pasture could not dampen my spirit after such a glorious sunrise. Two great training sessions
were held with area and chapter leaders from Idaho, southern Utah, Nevada and Arizona.

Then I drove 115 miles to drop a care package on my daughter’s front porch where her and her family, were under quarantine as she was sick with COVID. We then spent the evening at another daughter’s house and the drive home, getting home at midnight. The sunrise put into perspective the fact that no matter how dark the night, day will always come.

We need to look for the good and surround ourselves with greatness. President Gordon B. Hinckley said:

“I am not suggesting you simply put on rose colored glasses to make
the world about you look rosy. I ask, rather, that you look above and beyond the negative, the critical, the cynical, the doubtful, to the positive and the affirmative.”

Over the past couple of weeks we have completed this year’s area vice presidents training. These five sessions were well attended and great information was shared. Thank you to all who participated and helped with
the presentations. The executive council was also invited to tour the nearly
completed new Pioneer Center at This is the Place Heritage Park. Look for this to be open in the spring. This would make a great trek for
chapters.

Now for the most exciting news of the month.  Gary Smith, sup member and direct descendant of Hyrum Smith had possession of the historic Bear Flag. This flag is a painted stars and stripes flag with a bear and the words
“Life Guards” and “Always Ready” added. This flag was rescued from Nauvoo, and went with the Mormon Battalion on their march to California.

Following its return to the Utah Territory the Bear Flag became the flag of the Life Guards until they were disbanded. The Bear Flag dates back to Nauvoo and could possibly date to 1838 with the Saints in Far West Missouri. 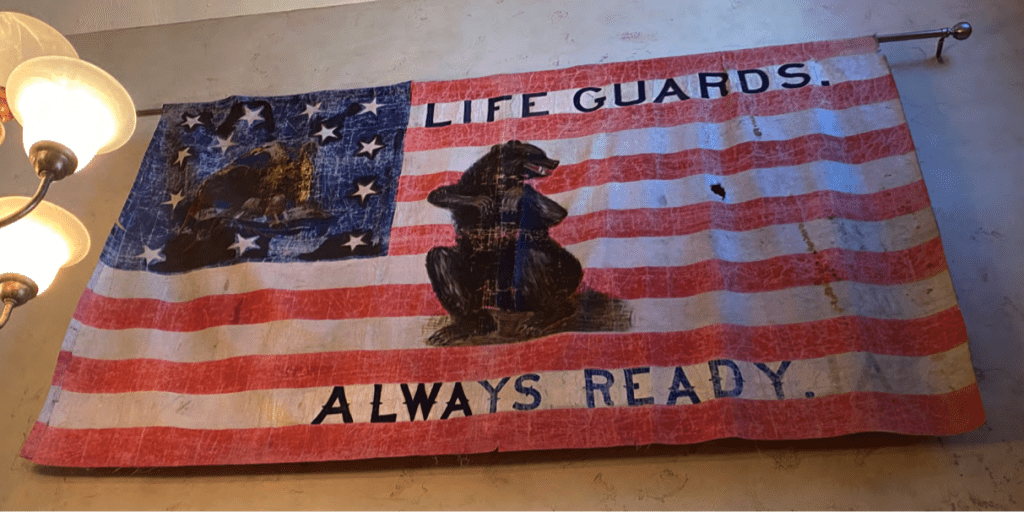 November is often associated with recognizing and realizing the things we are thankful for. As Election Day approaches don’t forget to give thanks for the blessing of living in the United States of America. The signers of the
United States Constitution worked to “form a more perfect Union”. The Union spoken of is as perfect as its citizens and elected officials.

Today negative ads, debates and other activities seem to be driving a wedge into that “more perfect Union”. If you were to believe both sides of an argument all hope would be lost. I compliment the candidates for Utah’s Governor this year, Spencer Cox and Chris Peterson. While they have differing views they pledged to have civil and cordial debates and interactions. What a refreshing idea.

Study the issues, get informed and participate in the voting process. James Madison said:

“A well instructed people alone can be permanently a free people.”

By not becoming involved and letting someone else do the work we put that
“more perfect Union” in jeopardy. Martin Luther King Jr. said it best:

“Our lives begin to end the day we become silent about things that matter.”

Have a great November and be Pioneer Strong.