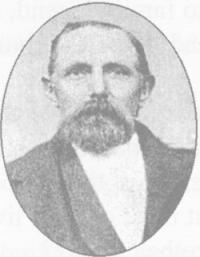 We don’t know very much about his life in Denmark. He lived with his mother’s parents some of the time. He was baptized into the LDS Church 27 April 1860 by A. Rasmussen. Niels Andersen and Inger Larsen are listed in the Emigration records from The Copenhagen Conference in 1861.

On 9 May 1861, Niels and his mother sailed from Copenhagen on the steamer “Waldemar” to England, then they proceeded to Liverpool where they boarded the ship “monarch of the sea” for the six week voyage to America. They reached New York 19 June 1861, then they proceeded by rail and steamship to Florence, Neb. They left Florence under the leadership of Capt Samuel A Woolley with an ox team. They arrived in Salt Lake City 22 Sep 1861.

According to family history, his grandfather, Lars Nielsen (and as many of his relatives who were converted) came to America, where he purchased two complete outfits in Florence, Nebraska on their way west. He was supposed to have come to Brigham City (although we have not found any record of him).

Niels married Dorthea Magdalena Nichols (daughter of Adolph August Nichols and Johanna Christina Art or Ault) 8 Oct 1862 in Brigham City, Box Elder, Utah. They had been on the same ship and with the same Company all the way to Utah. Dorthea’s parents had made the trip the year before with Capt William Budge’s Ox Train Co., and were living in Mantua, Box Elder, Utah.

The day after their wedding they walked to their farm in North Ward (now named Harper Ward). She carried a basket with her dishes in one hand, while with the other hand she helped Niels carry a large box which contained their worldly goods. A large stove kettle was fastened to the box, while suspended on a stick, which he placed across his shoulder with a sheet with quilts wrapped inside.

A beautiful dark haired blue eyed girl was born to them 16 Oct 1862, who they named Hannah Dorthea. They moved from North Ward, and two years later in Mantua, 7 July 1864 another daughter {Inger Christine) was born. About seven months later Niels and Dorthea made the trip to Salt Lake City, where they took out their Endowments 28 Jan 1865 in the Endowment House. The person who wrote Niels’ name made an error and used his mothers last name of Larsen instead of Andersen. Their next little daughter, Adolfhin Nicoline, was born 8 May 1866, but she only lived 4 days.

Sometime after their babies death they moved to Bear River City, Box Elder, Utah, where they lived in the Fort at night. Niels, and the other men took turns standing guard against Indian attacks. Their son, Niels Andersen Jeppsen was born 17 Oct 1867 in Bear River. Some of their neighbors were English, but the girls seemed to understand when they showed them how to dig roots to eat. In Feb 1870 their last daughter Elisabeth was born, but she died the same month.

At this time Dorthea took to her bed, never to be well again. Niels, hoping that living by her mother would help Dorthea, moved the family back to Mantua. A swinging bed was made in the wagon so that Dorthea wouldn’t have all the jars from the bumpy roads. Dorthea’s mother became ill and she died in the fall of 1871. Dorthea never recovered her health, and she died the next spring, 7 May 1872, in Mantua. She is buried in the Brigham City Cemetery.

Niels married Elsie Marie Eskelsen (daughter of Andreas and Marie Eskelsen), in 1873 or 1874. They had one son Andreas, born 19 Oct 1874 in Mantua. Elsie died 23 Oct 1874 in Mantua. Family history has Andreas living a very short time, but the Mantua Ward records show him being baptized in 1881. He is not listed with his father and the rest of the family in the 1880 Census of Mantua.

Niels felt that he needed a companion to cheer him on, and to help raise his children. He married Anna Katherina Jacobsen (daughter of Christen Jacobsen and Maren Johansen) in Brigham City, Box Elder, Utah, 27 Oct, 1877. Their first son {Niels Christian) was born 3 Apr 1879, but he only lived a few months. He died 10 Sep 1879. Their next son, Adolphus N. was born 27 June, 1880, in Mantua, and was blessed by his father 11 July, 1880.

Niels and his third wife lived happily for many years, during this time he served as president of the mantua livestock co., and was also road supervisor in the precinct for a long time. Through his generosity, the town of Mantua has its present cemetery, on the brow of the hill overlooking the canyon. He donated the site to the ward for cemetery purposes, as that ground was part of his original homestead.

When the LDS Church was having problems because of polygamy, some officers asked Niels how many wives he had and he told them three. They arrested him, put him in a buggy and were about half way to Brigham City before they discovered his first two wives were deceased. They were so mad they were going to make him walk back to Mantua, but he refused so they took him back.

For many years he was in charge of the ward choir. He sang when Lorenzo

Snow dedicated the Mantua Ward Church. He was also invited to sing before President Brigham Young. He was ordained a High Priest 7 Dec, 1895, by Rudger Clawson. He was a devoted man to his religion and labored until the last in the ward organizations, and as a ward teacher.

The family was shocked at his sudden death, as he had been ill very little in his lifetime. He died Thanksgiving Day, 24 Nov 1921, while partaking of his Thanksgiving dinner. He was survived by his third wife, and four of his eight children, 24 grandchildren, and 25 great-grandchildren.