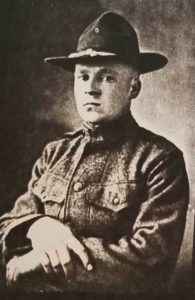 Royal Fox Neilson, Provo City patriot and member of the George A. Smith Chapter died July 12, 1979. He was 83 years old and had spent his lifetime in community service in the field of music and as a bugler with the 76th Infantry Regimental Band and with the American Legionnaires.

As veteran of World War I, he served as bugler for honor guards for over 1,000 services of his fellow servicemen. As an active member of the LDS Church he served as branch president in Arizona-California Mission and later in Utah as a Sunday School superintendent, teacher, high priest group leader and organist. He was highly talented as a musician and played the trumpet in orchestras as well as the piano, guitar and violin.

On November 16, 1921 he married Deane Steele in the Manti LDS Temple and is survived by one son and two daughters, Kirk Neilson of Orem, Utah; Mrs. John (Helen) Captain and Mrs. Carl (Rae Deane) Nuttall both of Provo, Utah. There are also 11 grandchildren and 13 great grandchildren.