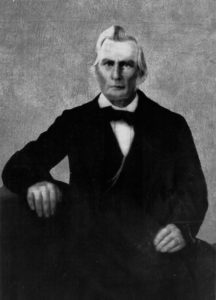 John deserves a place in every gallery and history where the makers of the State are commemorated. Before joining the Church he was a wealthy and influential manufacturer, being intimately acquainted with James Buchanan (afterwards President of the United States). Thaddeus Stevens and other political chieftains; and he remembered the visit of Gen. Lafayette when the chivalrous Frenchman made his triumphal tour of the Atlantic coast states at the beginning of the last century.

John was a pioneer who came to Utah in 1847. He joined the Church of Jesus Christ of Latter-day Saints in 1944, and went with his wife mary barr, and oldest daughter, Barbara, to Nauvoo to meet the prophet.

After meeting the prophet, they returned home and began selling their properties. They were quite wealthy, with a large farm and several businesses.

When he began travelling west, he missed the adversity of Kirtland, Missouri and Nauvoo, and as a result, when he travelled west, he had with him a lot of money. Most of the Saints coming west had lost their wealth as they were driven out of home after home in their progress west.

John had a leather money belt made with a number of pockets in it, and had his son wear it across the prairie. Each pocket was filled with $20 gold pieces, and worn around his waist. The legend has it that John had his wagon made with a false bottom in it, and placed his extra money in between the false bottom and the actual bottom of the wagon.

John and his sons helped the poor and sick who were still in Nauvoo, after they arrived in August 1846. He bought the flour mill brigham young had built to pay of the debts many of the Saints had, and fed thousands of them, then took them with them to Winter Quarters. Brigham Young would say of him, “Do you want to know how many of you survived in Winter Quarters? Well, I’ll tell you so you won’t forget. It was the money that John Neff brought from Pennsylvania which saved the lives of thousands of men and women, and children.”  He helped in outfitting the original band of Pioneers, his representative in that gallant band being Orrin Porter Rockwell.

He moved out of the Old Fort in Salt Lake City to the mouth of mill creek canyon in 1848, and built there his grist mill. It was the first grist mill south of Salt Lake City, and the founder of Mill Creek in this county. John built the 1st road into the canyon to obtain wood to build his home, and so the canyon was named after him. He was active in developing the agricultural resources of the Territory, and was a man of great benevolence. orson pratt said of him, “that during the famine year of 1856, when flour was worth $1.00 a pound, he refused to accept more than 6 cents per pound, the regular tithing office figure, and declined to sell at any price except to those who were in need. “

John and Mary purchased two children from Ute Slave Traders, and raised them to adulthood.  These children could be found feeding on the grasshoppers and crickets, and was a source of difficulty for the Neff’s.  These two wonderful children, at the time of their purchase, were on the verge of starvation, and were very thin, with protruding bellies.  They grew to be productive and contributing adults, and honored their benefactors.

A friend from Pennsylvania wrote about John, saying:

“He has nearly 3,000 acres of land…He has cattle and sheep by the thousands, that can at all times be seen grazing on the mountain benches; he is considered one of the wealthiest men in the Territory, has no desire to return to Lancaster, is exceedingly happy in his religion, has never had but one wife, and she is a perfect lady, one of the sweetest women of her age I have ever seen. Mr. Neff told me with more sincerity than ever I have heard that he had everything his heart could desire – happy man in his desert and mountain home.”

It certainly helps to have money to be as content as John was, and it helps to live in a beautiful area as he did, but even more than that, his giving is what brought him a particular kind of happiness. That is what made John and Mary happy, sweet and satisfied with life.  He was loved by all who knew him.  That love followed John at his death in 1869. His funeral procession was more than a mile long.