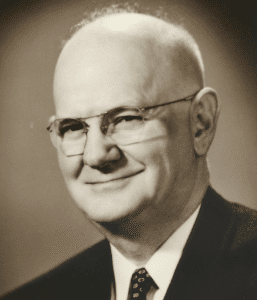 He had hoped to live to see pioneer Park on West Temple Street, restored to its original status as the first pioneer fort in the valley and produced an elaborate prospectus brochure on its possibilities.

Mr. Morgan was chief supporter and co-organizer of the Mormon Battalion at its inception. He provided uniforms, flags, drums, etc. and in other ways made the colorful organization possible.

Mr. Morgan was a graduate of the University of Utah and the Georgetown Law School in Washington, D.C. He was admitted to the Utah bar in 1910 and was appointed chief deputy Salt Lake County attorney in 1911, serving for three years.

He was president of the Morgan-Walton Oil Co.,supplier of commercial gas for Salt Lake City. He and his son were developers of the Clear Creek Gas and the Grass Creek Oil Fields in Wyoming.

A historian by avocation and devotee of pioneer histories, Mr. Morgan served as a director of the Utah State Historical Society.

A staunch supporter of the University of Utah, he was president of the Emeritus Society. In 1955 he was awarded the honorary degree “Doctor of Humanities” by Lincoln College of Illinois and a similar degree from Brigham Young University in 1959.

A devoted church worker, Mr. Morgan served as a member of both the Granite and Cottonwood Stake High Councils. He also served on the General Board of the YMMIA from 1912 to 1935. He was an honorary life member of the Master M Men organization and for many years worked on the executive board of the Boy Scouts of America. He organized and financed a boy scout band under the direction of noted John Held.

Mr. Morgan was born in Salt Lake City, Nov. 9, 1884 a son of John and Helen M. Groesbeck Morgan. He married Ethel S. Tate in 1909 in Chicago, Ill. Their marriage was later solemnized in the Salt Lake LDS Temple.

Funeral services were held Nov. 19 in the Holladay Fifth Ward Chapel and burial was in the Salt Lake City Cemetery.

Nicholas G. Morgan, Bulwark of Strength To Battalion And SUP

The passing of Nicholas G. Morgan, stalwart promoter of the Mormon Battalion and the Sons of the Utah Pioneers, was an irreparable loss to these organizations as well as to many others that benefited by his interest, devotion and philanthropy. Mr. Morgan will long be remembered, not only in Utah and the Mountain West but worldwide, for his contribution of bronze statues and markers, commemorating events and individuals of importance in history. “Nick” died Nov. 11 at the age of 87.

He was a prime pusher for the Mormon Battalion and set it off and away at its inception by providing the uniforms, drums, flags, etc. A former national president of the National Society, Sons of Utah Pioneers, he gave unstintingly of his time, great talent for organizing and more especially his money. He was one of the first life members of SUP.

One of his fondest aspirations was to restore Pioneer Park to its pristine glory as the first pioneer fort in the Great Salt Lake Valley. He spent a lot of money with architects drafting plans of the fort as it was in 1847 to 1851. It is fitting that a committee has been named by Governor Rampton to work out plans for this restoration.

Mr. Morgan was the big wheel that turned in the move to save the old Salt Lake Council Hall and getting it moved to the State Capitol Grounds where it now serves as the office building for the State Travel Council.

The Sons of Utah Pioneers are stronger today for having a benefactor like Nicholas G. Morgan to give it the support it had to have at its beginning and on to its present prestige and power.