This article originally appeared on pioneerstories.org 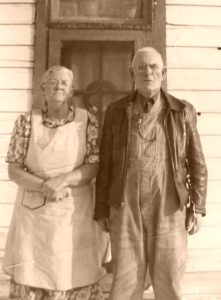 He was the youngest son of pioneer parents,

James Mitchell and Anne Hull.  He came to the Shelley area with his family when he was a young boy.

His grandparents came from Scotland and England, as did his parents and family as converts to the Latter Day Saint Church.  They settled in many different cities before coming to Shelley such as Salt Lake City, Hooper, Utah, San Bernardino, California and Franklin, Idaho.  They finally came to this underdeveloped part of Idaho where his family took advantage of the pre-exemption homestead rights and took up 360 acres of land two miles north of what is now Shelley, Idaho.

Shortly before this time, when the family was living in Franklin, Idaho, Robert Hull, brother of Ann Hull Mitchell and a nephew were killed by drunken Indians near Blackfoot while on their way to work on some land they had taken up.

The family of James Mitchell, Richard’s parents, came and settled here the day before the John F. Shelley family came from Iona, Idaho and built the first home and store.

Thomas Mitchell, the eldest brother, worked in the Shelley Merc for Mr. Shelley for many years.  He also served as a Counselor to Mr. Shelley in the bishopric.  Church meetings were held in the John F. Shelley home first; then when a school house was built, they were held there until a church could be constructed.

There were many months of hard work ahead for the family.  As soon as possible a large two-room cabin was built of logs.  Also barns and corrals for the stock.  Sagebrush had to be dug out with a ‘grubbing’ hoe before the ground could be plowed.  Grandma insisted on a place for a large garden first.  Water for drinking and home use was hauled from the Snake River until a well could be dug a few years later.

By this time several of the older children were grown and married and had been given 40 acres of land by their parents (James and Ann).

Richard Charles met Sadie C. van der Vlies in Ogden, Utah and they were married in the Logan LDS temple.  She and her parents came to this country from Holland as converts and had settled in Ogden, Utah.  After their marriage, they came to the Mitchell ranch located two miles North of Shelley, Idaho, close to the Snake River.  By this time most of Richard’s brothers and sisters were married and had homes of their own.  Richard was the youngest and stayed on to help his father (James Mitchell) who had been crippled in a farm accident.  Richard and Sadie moved into the house with his parents until they could build a home of their own.

On 1 September 1918,  grandfather, James, passed away.  Several of the sons had sold out and moved to various parts of the country.  It was then that Richard, Sadie and family and his mother (Anne Hull) moved to Burley, Idaho to be near his brother, Thomas Mitchell who had moved to Burley, Idaho.  The original farm was sold to Christian Anderson and he later sold it to Otto Beck.  It is now the first ward church farm.

Richard and Sadie at this time were the parents of seven children.  They moved to Burley, then due to a “bank failure” lost the farm there and then moved to Preston, Idaho where he was yard foreman at the Utah Idaho sugar plant.  But he always wanted to come back to Shelley.  This he finally did and bought a home from Heber Child and worked in the potato warehouses for many years.  They were the parents of nine children, two preceding them in death.