A Thrilling Chapter In Western History

One of St. Josephs most historic landmarks, the pony express stables, stands at Ninth and Penn streets. From this spot on April 3, 1860, a rider left to start the race to Sacramento, California, nearly 2,000 miles —a race against time, the elements and hostile Indians. Russell, Majors and Daddell undertook the organization of the Pony Express to cut in half the time it took messages to reach the California coast by the southern route stagecoach company; It was their hope to thus prove the more direct Central Overland Route and secure the mail contract from the United States Government.

The Pony Express was not financially successful as the owners spent $700,000 leaving a $200,000 deficit, and failed to get the mail contract because of political pressures. It did, however, write a never to be forgotten chapter in American history which to this day captures the imagination of all as they picture the daring rider racing across the plains. It did prove the central route and held on long enough to see the first telegraph line taken over communications to California and is therefore credited with saving that state for the Union in the war between the states.

Many men have played a part in the history of the old Pony Express Stables, both in the past and the present. In days long gone by, there were young men hired as riders— some 80 to 100 in all—who made approximately 160 complete trips across the western half of the continent, a total of 650,000 functioned. A company office and headquarters were in the front of the stables and the ponies were quartered in the rear of the building.  WANTED, YOUNG, SKINNY, WIRY FELLOWS — WILLING TO RISK DEATH DAILY — ORPHANS PREFERRED, WAGES $25 PER WEEK — was the advertisement to get lads to ride the pony. The company also employed 300 to 400 stock tenders, station men and helpers, who manned the estimated 190 relay stations where fresh horses were ready and waiting when the rider came in sight. This change of horses was accomplished in two minutes or less. 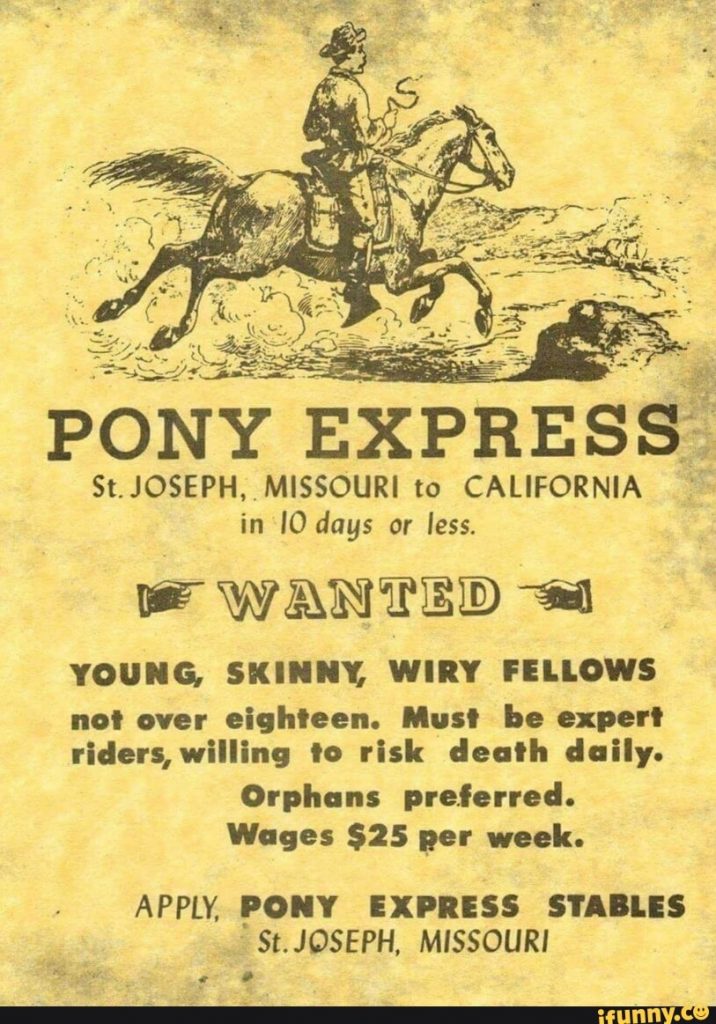 An article in the St. Joseph, Mo. Daily Herald on January 27, 1899, describes the Pony Express Stables (then known as the Pikes Peak Stables) as 125′ long with 60′ frontage, shingle roof which was supported by heavy native timbers and pine board walls, furnishing quarters for 200 horses. The stables were built by Ben Holladay in 1858 and rebuilt in the 1880’s by the owners at that time, the St. Joseph Transfer Company. The outside of the structure was rebuilt with brick, but the timbers and as much of the old material as possible was preserved and kept intact.

In 1946, the Chamber of Commerce took steps to insure the preservation of this historic spot in our city and the stables were purchased for $1,200 obtained through popular subscription.

In January, 1950, the Goetz family and the M. K. Goetz Brewing Company established the Goetz Pony Express Foundation to restore and preserve the stables. On Mav 3, 1959, through the combined efforts of the late Mr. M. Karl Goetz and the St. Joseph Museum, these stables were opened to the public as a museum.

In 1960 the Goetz Company deeded the stables to the St. Joseph Museum under whose direction it has been since that time.