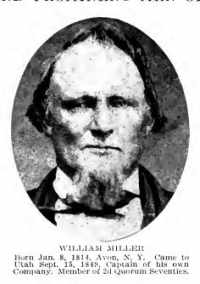 William Miller was born Feb. 8, 1814, at Avon, New York. He started for Kirtland, Ohio, Oct. 12, 1834; remained there three weeks conversing with the Prophet Joseph Smith and other Church leaders; was baptized Oct. 24, 1834. Miller attended the dedication of the kirtland temple. He moved with the Saints to Far West, Missouri, and was on constant duty during the mobbings and persecutions. He moved to Nauvoo in 1841 and remained there five years, being present when the corner and cap stones of the Nauvoo Temple were laid. He left Nauvoo in May 1846, arriving in Salt Lake City, Sept. 20, 1849. Early in Feb. 1850, he came to Provo and shared the experience of the Indian difficulties. He was a member of the legislature. Miller built the first adobe house in Springville. He served a mission to England in 1856. The Old Tabernacle was completed during his tenure as Utah Stake president.

William Miller figured prominently in Nauvoo in an incident concerning efforts made by federal officers to arrest brigham young. Brigham Young was in the Nauvoo Temple and was informed that federal officers were waiting at the door of the temple so that they might arrest him. He had his coachman bring his carriage around to the front of the temple. William Miller then put on Brigham’s cap and Heber C. Kimball’s cloak, left the temple and acted as though he were going to get into the carriage. The law officers ran up and arrested him. He protested loudly that they had the wrong man and that he was not guilty of the charges they brought against him. Believing they had Brigham Young, they carted him off to Carthage; all the while he continued to protest and claim his innocence.

Once they arrived in Carthage word soon spread that the marshal had brought in Brigham Young. There was great excitement until one man recognized William Miller. He called the marshal out, and after the marshal returned he asked Miller if his name was Young.

“He answered, ‘I never told you my name was Young, did I?’ ‘No,’ replied the marshal, ‘but one of my men professed to be acquainted with Mr. Young, and pointed you out to me to be him.’ Backenstos was called in and he told them William Miller was not Brigham Young. Another man came and said he could swear Miller was not Brigham Young. The marshal said he was sorry and asked Miller his name, he replied, ‘It is William Miller.’”

“The marshal left the room and soon returned accompanied by Edmonds [a lawyer] who was laughing heartily at him. Edmonds inquired if he had anything more to do with ‘Mr. Young.’ The marshal replied that he did not know that he had anything further to do with Mr. Miller.” (Brigham Young, in History of the Church, 7:550–51.)1

The conclusion of the incident is told in Documentary History 1845:311 as follows:

“President Brigham Young met with the Twelve in prayer and thanked the Lord for deliverance from the snares of their enemies. At 8:20 President Young left the Temple disguised and shortly after Brothers Heber C. Kimball, Parley P. Pratt, George A. Smith and Amasa M. Lyman left to elude the vexatious writs of the persecutors.”

“William Miller remained the night at Carthage at Jacob Backenstos’ house. Miller said he could not sleep, being interrupted by Edmonds’ continued roars of laughter at the marshal’s discomfiture. Miller saw two of the marshal’s guards, one of whom threatened his life. Miller came to Nauvoo with the stage; the driver told him that the officers said it would be like searching for a needle in a hay mow to undertake to find Brigham Young in Nauvoo.”

It is not difficult to imagine Brigham Young and William Miller reminiscing about this incident when they met at the dedication of the Old Tabernacle in Provo.

1 Quoted in Presidents of the Church, Student Manual, Religion 345, published by The Church of Jesus Christ of Latter-day Saints.