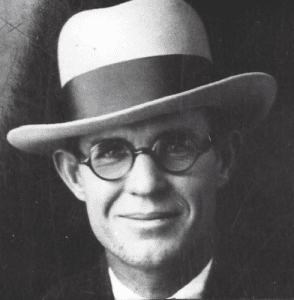 Lorin Church Miles, former secretary and treasurer of the Cedar City chapter and vice-president of the National Society of Sons of Utah Pioneers, was born in St. George, Utah, to William G. and Paralee Church Miles, died on November 15, 1992.

He received his early education there, and after serving his country in World War I, he returned to the Dixie College and completed two years, which earned him a normal diploma preparatory to teaching in the the elementary schools of the state.

His first teaching assignment was in Garland, Box Elder Co., Utah, where he met and married his wife Elva Johnson who became the mother of five sons and daughters, L. C., Jr., Gail J., Lois Marie, Marilyn, and Carol, now all married with families.

After filling a mission to California (1924-1926) under Pres. Joseph W. McMurrin, he accepted a part-time teaching position in the Provo schools and the BYU, and was able to complete credits for bachelor of science the first year and master of science the second year, majoring in western history and public school administration. In fulfillment of part of the requirements for the degree, he wrote a master’s thesis on the Mormon Battalion, using the diaries of Henry Bigler and Samuel Miles, his grandfather. Mr. Miles’ grandfather, Haden Wells Church, was also a member of the battalion.

After finishing his studies at Brigham Young University, Mr. Miles accepted a position as principal of the Cedar City schools in Iron County, and, after 32 years, one of which was taken off to finish his E.D.D. at USC in Los Angeles, he retired in 1961, Before his retirement, he was nominated by the state school officials to “Who’s Who in American Education.”

Soon after retiring from the schools, Mr. and Mrs. Miles were called to the West European Mission where they spent the major part of their time in the British South Field, at Reading and Oxford, serving as branch president and also as a mission officer in charge of home teaching for the British South.

On returning from England in 1965, Mr. Miles has been serving as student counselor for Stevens Henager Business College, covering the Tri-state area.

His greatest joy and satisfaction, he states, has come from his association with the young people in school, church and community, in such activities as scouting, Stake Supt. of MIA, recreation supervisor, Legion youth programs and singing groups, to mention only a few.