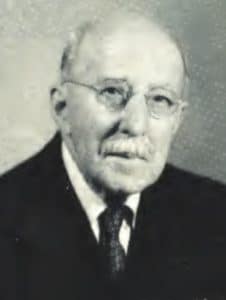 george edmund miles, 103, active member of the dixie mission chapter, Sons of the Utah Pioneers, died February 7 of natural causes at his home in St. George, Utah. He was patriarch of the St. George Stake East.

[Mr.] Miles attended the University of Utah and Brigham Young University and later became a bookkeeper. He became St. George city clerk [for] 18 years, as juvenile judge for eight years, and as justice of the peace for three terms.

A former clerk and store manager, Mr. Miles served an LDS mission to the Southern States from 1896 to 1899. He was an ordinance worker in the St. George LDS Temple for 25 years.

He married Victoria Josephine Jarvis in 1895 in the St. George LDS Temple. She died in May 1941.

THIS BIOGRAPHY ORIGINALLY APPEARED IN THE MAY/JUNE 1970 ISSUE OF PIONEER MAGAZINE.