This pioneer story was submitted by Acacia Barney, as part of the Cotton Mission Chapter’s 4th Grade Student Essay Contest. 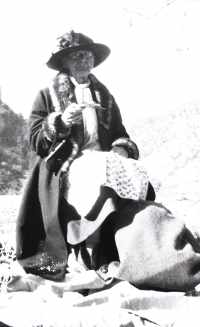 Mary Jane lived in Ireland until April 19, 1856. She left because she was a member of the Church of Jesus Christ of Latter-day Saints and her family wanted to be with other people in the same religion. When Mary Jane left, her boyfriend gave her a pretty scarf. She knew she would never see her boyfriend or Ireland again.

Mary Jane arrived in Boston later in 1856. From there she went on a train to Iowa. From Iowa, her family joined a handcart company that was going to Utah. For most of the trip, Mary Jane carried her two year old brother on her back. She also helped carry another little boy on the way. In Wyoming, Mary Jane’s dad died. He died two days before they arrived in the Salt Lake Valley. 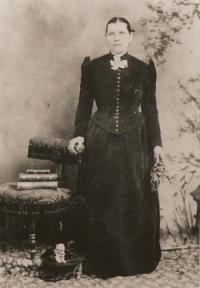 Mary Jane was Priddy Meeks’ third wife. The other two wives were nice to her. Mary Jane and Priddy Meeks had ten children together. Mary Jane helped her husband a lot with his doctor work. She was a midwife and delivered nearly 1000 babies. Mary Jane and her family moved to the United Order (now it is called Orderville) in 1877.

After her husband died she continued being a midwife. Mary Jane died on January 19, 1933. She was 92 years old. She was buried in Orderville where my grandpa and grandma live. I liked it when her boyfriend gave her the scarf. I liked learning about Mary Jane McClever Meeks.