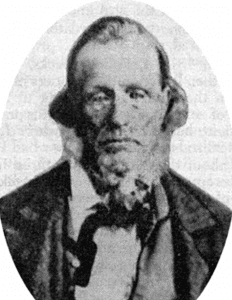 Born August 29, 1795, in South Carolina, priddy meeks was converted to the LDS Church in 1840 in Brown County, Illinois, where he also served as bishop. Meeks joined the Saints at Nauvoo, Illinois, from 1842 to 1847 and was blessed by the Prophet Joseph Smith and Hyrum Smith that he would have children and sons to carry on his name. They requested that he name his sons after them [which he did]. Arriving in Salt Lake Valley, October 1847, he served as ﬁrst president of “Society of Health,” which trained the Saints in better medical practice. The remainder of his life was spent in colonizing southern Utah including Parowan (1850), Leeds-Harrisburg (1862), and Berryville, now Glendale (1846). His family was the ﬁrst in Mt. Carmel (1864) living in a dugout. In 1876 he moved to Orderville, Kane County, and joined the United Order. Brother Meeks was a strict observer of the Word of Wisdom and practiced medicine somewhat after the “Thompsonian” school.

He was a faithful Latter-day Saint, and departed this life at his residence in Orderville, October 7th, 1886, at the ripe age of 91 years, leaving two wives and a large posterity to mourn his departure.

This article originally appeared in Vol.59 No.1 (2012) of Pioneer Magazine