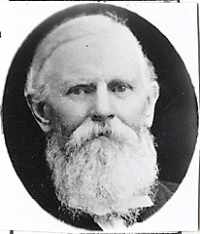 Born on October 27, 1837, in Yorkshire, England, John Lambert Maxwell discovered his love for the land early. When he was only 18, he became an apprentice gardener, ﬂorist, and nurseryman, and after completing his apprenticeship, he began working on some of the area’s largest and most beautiful gardens.

In 1859 he exhibited ﬂowers at the Peel Park United Grand Floral Fete and received a prize for the best display in his class. He also earned the appointment of head gardener at the Harris Mansion, one of the largest estates in Yorkshire.

On January 1, 1860, John Lambert was baptized in the ocean. His life history records, “As I rose from the waters of baptism, a white dove hovered over me and seemed to symbolize a feeling of peace.” He married Jane Hird on March 6, boarded The Underwriter on May 1, and headed for the promised land.  After braving the tossings and turnings of ship life for a month and 12 days, the Lamberts landed in New York.

“From there, we started our long trip across the plains,” John’s history reports. “We had to walk most of the way and suffered as did many others. We were a part of Captain Brown’s Company, which arrived in the Salt Lake Valley on August 9, 1860. We camped at a spot called the Eighth Ward Square.”

Shortly after his arrival in the valley, he began working as a gardener for President brigham young. He was responsible for a large vegetable garden to the west of the temple, and he also landscaped the Prophet’s residence. Later he would design gardens for President John Taylor and other recognized men of the day, such as William Jennings and John Clark.

In 1862, John and his family moved into a home owned by President John Taylor (at South Temple between West Temple and First West), and John began his ﬂorist business—one of the ﬁrst in the valley. He loved spending his time growing gorgeous ﬂowers and luscious fruit and is credited for raising the ﬁrst head of celery ever grown in Utah (in 1865)—sold for 60 cents a head!

In addition to his ﬂorist business, John began experimenting with “hot beds,” a venture that became the beginning of his greenhouse work. He rented one and a quarter acres of additional land, where he experimented with other fruits, vegetables, and ﬂowers.

“On this land I planted my ﬁrst English Damson plums,” his history records, “which grew from stones which I carried with me from England. This was the ﬁrst of this variety ever raised in this country and came to be called the Maxwell Damson.”

Colonel R. T. Burton lived nearby and dearly wanted a lawn. However, he feared the grass would never grow because of the lack of water. He discussed the matter with John, who felt sure that a solution could be found.

“Grandfather Maxwell had the determination and the faith in himself that this project could be accomplished,” reports his granddaughter-in-law Isabelle Randall Maxwell. “He was told a lawn would not grow because there was no way to sprinkle it [but] through his ingenuity was able to grow a beautiful lawn by watering [it] from an irrigation ditch.”

John grew beautiful trees and was one of the ﬁrst in the area to offer trees for sale. In 1870, a Mr. Wade from Kaysville ordered 174 of his trees for planting in that area. The trees grew well and were beautiful. Some even survive to this day. They made such a difference that John received many more requests for trees. He also furnished the grove of trees at Fort Douglas.

Potatoes were one of his specialties. Samples of his potatoes were sent all over, from Tooele to Summit. An entry in his diary reports that he once grew 180 pounds of potatoes from one pound of seeds, which was received from the East. “It took a little patience,” his history points out. “I would cut the sets very small and plant them in [small] boxes in the greenhouse. As they grew, I would split them and transplant them. When they were ready to send up tubers, and reached about 3 inches long, I would take these cuttings off and obtain new roots from them.

“We raised a squash so big it took three men to roll it up a board onto a wagon,” his history continues. “Now that sounds like a ‘ﬁsh story,’ but it was true. It took ﬁrst place at the Territorial Fair that year.”

The Deseret Agricultural Society awarded him a diploma for the ﬁnest specimens of ﬂowers, and he received numerous medals and prizes for his ﬂowers, fruits, and vegetables for many years.” His diary indicates that he manufactured brooms made from birch limbs and willows (later he raised a broom corn that made even a ﬁner broom), raised sugar cane, and often traded his stock for molasses and other merchandise.

He was a member of the Deseret Militia and served as secretary of the Deseret Agricultural Society. History gives him credit for introducing many new varieties of ﬂowers; the Martha Washington Palagonia is the one he was most proud of.

John Lambert Maxwell died July 28, 1905, after only two days of illness. Many mourned the passing of one who had made such a signiﬁcant contribution to the beauty of the earth.

“It made me feel good to be a part of the building up the community, to do what I could to make the desert bloom,” he reportedly said. “The land was my life. It is my hope that some of my children will learn to love the good earth as I did and gain from it what I gained from it.”

This article originally appeared in Vol.60 No.2 of Pioneer Magazine.