I was born in Nauvoo, Hancock County, Illinois, May 14, 1841, the youngest daughter of hyrum smith, Patriarch, who was martyred in Carthage Jail. 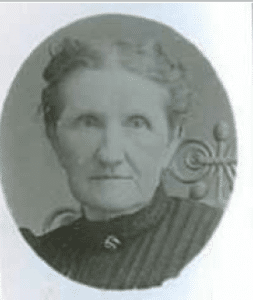 I am the only sister to joseph fielding smith; we are the only two children of mary fielding, second wife of Hyrum Smith, my father. I was three years old when my dear father was taken from the bosom of his family and from his friends. When he bid them the last farewell, and gave them the last farewell kiss. I remember well the night that he was murdered. I had the measles, I had taken cold and it had settled on my lungs, I could not speak above my breath. I begged of my dear mother to lie down to rest, but she walked the floor all night. She never lay down to rest once. She would read the Bible awhile then walk again, until the day began to dawn. There was a knock on the door. Mother asked who was there and the answer was “George Grant.” She opened the door and asked, “What is the news?” He gave answer that Joseph and Hyrum were both murdered!

My poor mother stepped back calmly exclaiming, “It cannot be” He gave answer, “Yes, it is true.” She fell back against the cupboard and Brother Grant helped her to a chair. The news flew like wildfire through the house. Those cries of agony that went through the soul of everyone were terrible. The anguish and sorrow that was felt can easier be felt than described. It will never be forgotten by those who were called to pass through it.

He was loving, kind, and affectionate, indulgent almost to a fault.

I remember one day mother had made him a pair of pants and he was very proud of them. I saw him walk back and forth with his hands in his pockets. It was seldom that he was cheerful, he always looked anxious and sober.

I can remember many little things of my beloved father’s death. How sad and sorrowful my mother would look. She scarcely ever smiled. If we could get her to laugh we thought we had accomplished quite a feat. I never saw her more than smile. Oh how I loved my mother; I feared to displease her. I would rather burn my hand than vex my mother.

I can see the sorrowful look now. Those years were the severe trial of my life. I felt that I did not care to live any longer; my heart seemed crushed. I was not old enough at the time of my father’s death to fully realize it, as I did the loss of my mother’s death. Many time I felt the keen want of a loving mother to comfort me in trials that I had to pass through. It was a sore bereavement which I felt that i could never wear out with time. I went with my mother every day for three weeks while she worked in the Nauvoo Temple. What joy that was to me. My mother to this very day is perfect in my mind’s eye. God bless her memory.

I emigrated to Salt Lake City with my mother in 1848. We left our home, just as it was, all the furniture, in fact everything we owned. The fruit trees were loaded with rosy peaches and apples.

We bade goodbye to the loved home that reminded us of our beloved father everywhere we turned. We crossed the Mississippi River on a skiff in the dusk of the evening. We bade goodbye to our dear old grandmother, Lucy Mack Smith. I can never forget the bitter tears she shed when she bade us goodbye for the last time. She knew it would be the last time she would ever see her son’s family again in this life.

Through my father’s death, caused by the massacre of 1844, mother was left sole guardian of a large family of children and dependents, for whom she provided the means of support, and the removal from Nauvoo to this peaceful valley of the mountains, after providing a home for the further wants here.

She was called from her family and numerous circles of kindred and friends to enjoy the society of her martyred husband and the Prophet and the Saints that had gone before, to another state of existence. Her last illness of about two months continuance, she bore with unusual patience and fortitude. She only wished to live longer to do good to her family and those around her. She died the 21st of September, 1851. She has entered into rest and may the example she set during her life be not forgotten by those she left behind to follow in her footsteps.

I was then at the tender age of eleven years. I have felt when seeing children with parents to love and care for them my path was not a smooth one. But I am proud to be her daughter. She was truly a mother in Israel and her name shall be held in everlasting remembrance, associated as the were with the persecutions of the Saints, those tragic in a superlative degree, those peculiar qualifications that surpassed and invigorate the minds in adversity, and perseverance wroth of imitations.

At the age of 15 years I was married to William Jasper Harris, in the endowment House at Salt Lake City, 21st of April, 1857. My brother Joseph F., at that time was filling his first mission in the Sandwich Islands. Two days after our marriage, my husband started on a mission to England. While he was gone I lived with his mother, Mrs. Emily Harris Smoot. My husband was absent on his mission one year and four months. In his absence the Saints were called upon to leave their homes and move south. I moved with the Smoot family to Pond Town, where we spent the summer, or until the latter part of July. The Elders were called home on account of this trouble. As we were traveling along the road, I was driving the team of horses. I just drove around the Point of the mountain when we saw a man riding on a white mule. To my great surprise it was my husband. We had not heard from him for six months, so we were not expecting him. It was an agreeable surprise. We reached home safe and found the old house just as we left it. We moved to Provo in the Spring of 1868. We are still residing here in the same place.

I belong to the Relief Society of the Provo First Ward, Utah Stake. Sister Johnson is the president; she and her counselors are good women. They have my faith and prayers.

Ma Smoot is our Stake Relief Society President; she is beloved by all who know her. I also mention my dear mother-in-law, Emily Smoot, God bless them both, may they live long and be a comfort to their family.

I have enjoyed living in this world, I am grateful for the kindness from the good people of this town, they have helped me in times of sickness and need. Now my dear children, never be ungrateful. Always be sure to pay your tithing, for by so doing I have, and you will, receive a great many favors and blessings. I feel to sincerely thank my Heavenly Father for His mercies to me. Ingratitude is a very great sin. Through privations and hardships, my load has seemed at times more than I could shoulder, but I tried to do my duty. I have tried to be a Latter-day Saint. My Father in Heaven knows how hard it has been. He has seen my struggles, has heard and answered my prayers, that have been offered for the welfare of myself and those I love. Though many times I have fallen short through my weakness, my desire is to do the will of the Lord and live so while I remain here on the earth to strive to keep his commandments, that at the last day He may say “Well done, my faithful handmaid.” This is the desire of my heart.

My dear children, when you read this letter I shall have passed away very likely; although my blessing says that if I am faithful I shall never sleep in death, but shall be changed in the twinkling of an eye and be caught up to meet the Savior in the clouds and be forever with Him.