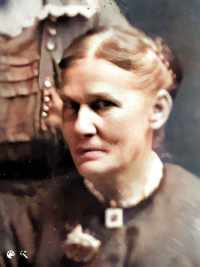 In the year of 1861, the eldest Howard boys, Thomas and William, came from England to Salt Lake City to work and earn money to bring their parents and the rest of the family. Two years later, 1863, they sent for their Father, mother, (Joseph and Ann Shelton Howard) with their seven other children.

Mary Ann Howard, the fifth child, was twelve years old when she came to America. They were six weeks and three days crossing the ocean. They landed in New York Bay and started to move westward. Her father and three of the children were very sick while traveling through the states, until after they reached St. Joseph, Missouri, and started across the plains.

All through their journey they lived mostly on flapjacks and water. Her father hired a man and his team and wagon to bring them across the plains. The rozell hyde company. The driver was very cross and would never let any of them ride no matter how tired they were. They came across the plains in a little easier way than the hand cart company, but they certainly endured many hardships.

Mary Ann with her friend (a young girl whose parents had sent her from England in the custody of the Howards) walked along ahead of the wagon train whenever they could and picked their aprons full of buffalo chips which they made a fire of in the evening to cook their food.

One day they were lucky, they thought, because some rich people came along in a white top two seated buggy. They invited them to ride which made them very happy. They rode as far as they dared because they had to build a fire for their folks at night. So they got out of the buggy and thanked the people for the only ride they ever received in walking from Nauvoo to Salt Lake City. When their folks caught up with them they were criticized very severely for taking that ride. They were afraid they had been kidnapped or some wild animal might have killed them.

One day Mary Ann’s mother became so tired she asked the teamster if she could ride. He answered, “No my team has all they can carry. No, you are just lazy that’s all.” So she was forced to continue walking while the driver sat unconcerned on the wagon seat. The next day the mother and her baby were put in the wagon by the father who told the driver she was too sick to walk any further.

They were three months crossing the plains. Mary Ann’s shoes wore out and she prayed everyday that somehow she might have some new shoes. One day soon after, in their traveling they saw a pair of shoes sitting along side of the road, evidently left by the company ahead of them. They were just her size and though they weren’t new they were much better than her own. This was just one of many faith promoting incidents in her life.

Her two younger sisters died while crossing the plains and they were just 300 miles from Salt Lake City when her mother passed away. Mary Ann, age 12, and Emma, age 10, washed and dressed their mother, wrapping her in sheets ready for burial. This was a very heart rendering experience for these two young girls. They gathered sage brush to cover and conceal the grave so the coyotes wouldn’t find it so easily.

The remainder of the family arrived in the Valley on Oct. 27, 1863. The family moved to the W. S. Muir farm at Bountiful, Davis County, Utah. There she later met Judson A. Tolman whom she married.

After her husband’s death she visited among her children acting as midwife, and making rugs, etc. for them. She also spent quite a period of time homesteading some land for her son-in-law Denmark Jensen. She died Sept. 23, 1931 at the home of her daughter, Charlotte in Salt Lake City, Utah, and was buried in the Preston, Idaho Cemetery, Sept. 26, 1931. She lived to be 80 years of age and at the time of her death there were ten children still living, 110 grandchildren and 58 great-grandchildren.