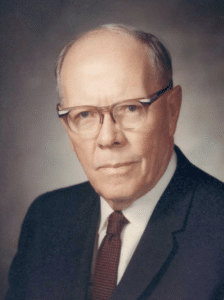 Joseph Leonard Love, 76, prominent and long-devoted member of the Sugar House Chapter of the sons of utah pioneers, civic, business and church leader, died Feb. 8 , 1971 n a Salt Lake City hospital of a cardiac arrest. He was stricken while teaching a Sunday School class the day previous.

Mr. Love was organizer of the Koepsel and Love Co. which he formed in 1926. The operation has since been broken down into the separate corporations of the Love Machine Co. Inc., Automotive Manufacturers Warehouses, Inc. and the Diesel Electric Service & Supply Co. Inc.

First bishop of the Yalecrest Ward of Bonneville Stake, he served missions in The Netherlands and in the Northern States. From 1956 to 1959, Mr. Love was president of the Northern California Mission. He served as a member of the General Priesthood Committee of the Church and at the time of his death was a host at the visitors Center on Temple Square.