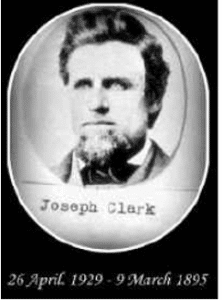 My father, Joseph Clark, was born in Clinton County, Ohio, April 26, 1828. His Parents, Samuel and Rebecca Garner Clark, were sturdy pioneers. He was fortunate in being raised in a large family of children, his parents having thirteen sons and daughters.

His early life was spent on a farm. This gave him vigor of body and a deep love for nature. His reputation for honest dealing was known to his host of friends. His kind heart was always expressed in charitable acts. He also had sound and calm judgment. His parents joined the Church of Jesus Christ of Latter-day Saints at a very early date, and father was baptized when a small boy. With his parents and family, he endured the hardships and persecutions that the Saints were subjected to at that time.

The spring of 1846 found my Grandfather and family in an old wagon, with his team and what possessions he could carry, headed toward the Great West. It was 2,000 miles to the Pacific Ocean, with its vast plains and mountains, its deserts and washes, its roving tribes of Indians, its wild beasts and reptiles. The weather was cold, with snow covering the ground. There were no roads, only trails in the soft mud of those who had gone

ahead. They made slow, but steady progress, and on June 14, 1846, arrived at Council Bluffs on the Missouri River. They had no sooner pitched their tents and made camp when the startling news reached them that war had broken out between the United States and Mexico. On June 30, Captain James Allen of the United States Army, with Headquarters at Fort Leavenworth, arrived in camp and asked for an interview with Pres. Young; He bore a letter from General Kearney asking whether the Saints would

enlist among their number four or five hundred able bodies of men to march into California and take possession there. Pres. Young knew that the loss of this great manpower would greatly weaken his camp and that he would have a fearful responsibility in caring for the dependents who were left behind. After deliberating for some time, and exacting some promises from Capt. Allen, Pres. Young dramatically replied, “Captain, you shall have your men.”

This is the history of the origin of the famous Mormon Battalion and their unparalleled parch of 2,000 miles on foot across the barren desolate waste of the southwestern part of the United States. Their accomplishments, saints to this day as a mark of honor and fidelity of their Church and Country.

At this time, my Father was 18 years of age. When this call came, he and his younger brother, Riley Garner Clark, enlisted in Company A, Iowa Battalion, Mormon Volunteers, under command of General Kearney, July 16, 1846. While on the march to San Diego, they endured many hardships. At one time, they had marched all day, and both men and teams were exhausted. The water they had expected to reach by night was still seven miles away. So, they had to camp without water. The last of their provisions were gone, so beavers were killed, which served as their daily food. They served from July,1846 to 1848. They were honorably released at San Diego.

General Kearney was more than pleased with his Mormon boys. He lifted his had with martial pride and said, “Over the Alps Napoleon went, but these men crossed the continent. This was the greatest march of infantry in the history of the world.”

My father reached Salt Lake Valley in 1848; remained there for a short time, then moved to Provo where he spent the remaining years of his life. He met and married Sarah Topham Oct 17, 1849, at Provo City. They were the first couple married in Provo. They were married by Elder Isaac Higbee. They lived in the fort that was build to protect the white families from the Indians. Eleven children were born of this union.

My father was one of the Indian War Veterans doing guard duty at home, and in 1856 went to Cedar Valley with a posse after the Indians. He fought in the Tintic War, the Timpanogos, the Walker and Black Hawk Wars. He was one of the men selected to go to Echo in 1857-58 as a defender of Mormon interests at the time Sidney Johnson’s Army came to Utah.

One morning, my father went out to feed his horses and found them back in the stable, as far as the ropes would let them. They had not eaten their hay and grain. On moving the hay in the manger, father found three young Indians hiding there. They belonged to the Snake Tribe. At that time the Snake and Ute tribes were at war. He took them to the house, then hid them in the bushes. Here he found four squaws and their papooses. They stayed hid up until the battle was over, father and family feeding them.

In 1849 grandfather Samuel Clark made the first leather that was made in Utah. Father helped in this business and learned the trade, and afterward ran the tannery for 16 years. He afterward engaged in farming. He and his brother, Riley Garner Clark, operated a sawmill, a thrashing machine and molasses mill. The large waterwheel that ran the machinery to operate the mill was on the corner of 5th West & 3rd North in Provo.

In connection with this mill, he also had a salt grinder, where he ground salt, which was brought from Salt Creek Canyon.

On July 26, 1953, father married Hannah Topham, she having no family. She and the first wife were sisters.

On September 26, 1868, he married my mother, Francis Carter Clark in the old Salt Lake Endowment House, George Albert Smith performed the ceremony. Ten children were born of this union, nine sons and one daughter.

His religion was always first and foremost with him. He was always ready to fight or to do; to run or to stay, or do anything else the lord, or those in authority required of him.