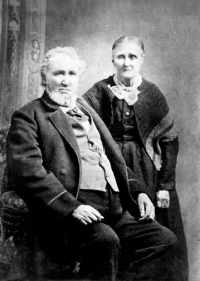 Tarlton Lewis was born in May, 1805 in north carolina.  The Lewis family moved to Kentucky next to the Gimlin Plantation where his future wife Malinda was raised.  Malinda’s brothers were strongly opposed to their sister marring Tarlton.  They promised to care for Malinda for the rest of her life, and they threatened to beat up Tarlton.   Nevertheless, Tarlton and Malinda were married.
The Lewis’s were baptized into the L.D.S. Church by Tarlton’s brother, Benjamin.  After joining the Church Tarlton, Malinda and children moved near Haun’s Mill, Missouri as persecutions of the Saints were increasing.  In late October, 1838, Governor  Boggs issued the extermination order.  A mob of over 200 mounted and armed men attacked 37 Saints, men and boys, and killed 17, including Benjamin who had baptized Tarlton and Malinda.  Fifteen others were wounded including Tarlton who received a musket ball to his shoulder and carried it the rest of his life.
The settlers lost livestock, goods, homes and land and women were assaulted.  Tarlton moved his family to Nauvoo.  When construction on the temple began, Tarlton and his son, Samuel, went to work at the temple.  Samuel became a stone cutter at age 11.   Tarlton went to Wisconsin to harvest timber which was floated down the Mississippi to be used to make cabinets, shingles, scaffolding and cranes for the temple.  Brigham Young, Tarlton Lewis and 8 other men placed the capstone on the temple.
Tarlton was set apart as Bishop of the Nauvoo 4th Ward by Joseph and Hyrum Smith.  Later Tarlton and Malinda received their endowments and were sealed in the Nauvoo Temple.
On June 27, 1844, the Prophet Joseph and Hyrum were murdered at Carthage Jail.  Persecutions followed.  The evacuation from Nauvoo began on February 4, 1845 in the dead of an especially cold winter.  Some of the evacuees were fortunate enough to cross the Mississippi into Iowa on thick ice.
In Iowa the Saints built shelters, but in their exposed, terrible condition people died and babies were born.   Many families were destitute and sick.  Tarlton’s family lived in a wagon box with only a canvas cover as shelter from the cold.
To obtain water for drinking, cooking and livestock axes were used to chop holes in the river ice.  When Malinda went for water, she took her six-year old son, Edward Partridge Lewis, who carried his little brass bucket with him.  Malinda filled her bucket and started back to camp.   When she looked back, she could not see Edward.  At the river’s edge she found only his small brass bucket.  Edward was nowhere to be seen.  The family looked for weeks before finally assuming that Edward had slipped into the hole and was swept down the river.
As with most Saints, the Lewis family accepted this tragedy and moved forward with faith and determination to do the hard things that they might be called upon to do.
The Saints wintered on Pottawatomie Indian lands with Federal government approval.  When the Mexican War began, U.S. Army officers arrived at the Iowa camps to recruit 500 men over the age of 18 to form what became the Mormon Battalion.  For many this was another test of their faith and mettle.  With Brigham Young’s encouragement the Battalion was formed to march to Fort Leavenworth, Kansas and from there to southern California.  Samuel Lewis, age 16, signed up even though he was not old enough.  Tarlton’s hair turned white over night from shock, and people began referring to him as “The Grand Old Man.”
Samuel was big and strong for his age and he technically did not lie.  He wrote the number 18 on a piece of paper and put it inside his shoe and when asked if he was over 18, he said, “Yes, sir, I am over 18!”
President Young prophesied that no one would be lost in battle.  At Fort Leavenworth the men receive a uniform allowance, but they chose to wear their everyday clothes so the uniform allowance could be used to help in the Saints trek to Utah.   The pay also proved to be a blessing to the Saints.
The Battalion, on it march to San Diego, marked what was to become an important southern route across the United States.
Tarlton was chosen to be a part of the Pioneer Company and was appointed a caption of 50.  He was one of those who entered the Salt Lake Valley on July 22, 1847.  In Salt Lake he was called to be the first Bishop.  Because of his wood working skills, he also began building homes and a stockade.   He helped colonize other Latter-day Saint towns and served as bishop several times.  He was a stalwart ancestor to look up to.