The cover of (the Spring 2013 issue of Pioneer Magazine, shown below) illustrates an incident that happened as the immigrants came to Lee’s Ferry and were faced with crossing the river. 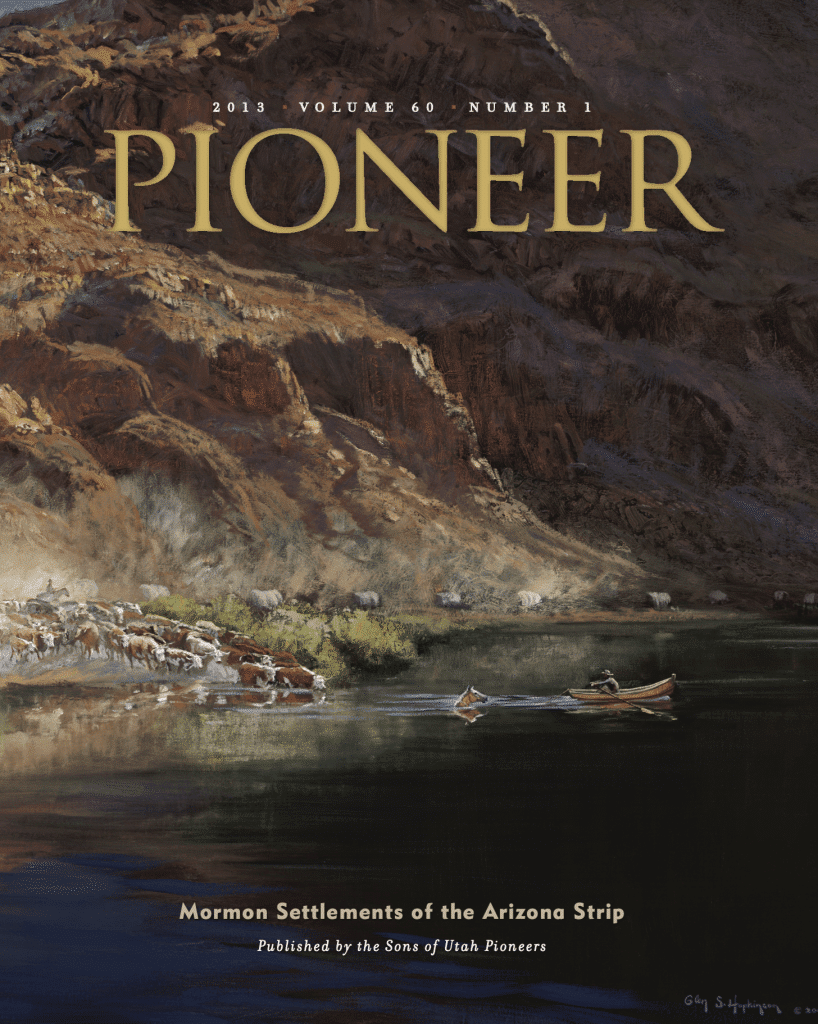 charles innes robson jr.—a grandson of the original Charles Innes Robson who was one of the four founders of Mesa, Arizona— made an audio recording of this incident:

“Brigham Young sent those first four wagons. He told them he had been hearing stories about a prehistoric desert with some earmarks of old canals that had been laid out intelligently, and there had been a pre-historic people here. And he said, ‘You gather all your families, children, and you’re not coming back. If you can’t find a way to get water on that desert, then you keep a-going and go down to Mexico.’

“So they brought all their cattle and their horses and their oxen. They had some 60 head of horses and over 100 head of cattle. And there’s quite a story to tell about their trip. See, there was no such a thing as reservoirs on the Colorado River. It was a big river and a vicious river, and you could get drowned in there awfully easy. There was no barges or anything to get over, you know, anything like that. So, they come to this river on their way down to [can’t decipher word], and they couldn’t figure out how to get all their horses, and all their cattle, and all their wagons and families across the river. That was the first big problem.

“Well, they had an old-timer with them that had kind of helped get the Saints from Nauvoo out west. Soon after he had seen that river, he fixed up a canoe and he had an old horse that would do anything—jump through the moon if he told him to—and he tied this horse behind the boat. They had all their horses, the horses would be the easiest to follow. Here this old, good horse tied behind the boat and he got the boat down into the wild river, and they had some help to hold the boat back until they got horses all up there. See, there was quite a few people, there was some 60 people in this wagon train, kids and families. So he started to row, this old horse, he followed right in there so when his horses got all on the bank, when they seen this horse going into it they followed him in, and then when the horses got in, the cattle seen the horses in and they all got in the river, and they got across that river without even losing a single calf, or colt, or horse or anything.”

The above portion of the article originally appeared Vol. 60, No. 1 issue of Pioneer Magazine.

Lee’s Ferry is a site on the Colorado River a few miles below Glen Canyon Dam. It was one of the rare sites for some 250 miles where one could cross the Colorado River. Sheer and deep canyons as well as the volatile nature of the river made crossing just about anywhere else impossible. With Glen Canyon to the north and the Grand Canyon to the south and southwest, this site where one could cross the Colorado is somewhat of a geologic wonder. One other site would be the Crossing of the Fathers, which is now covered by the waters of Lake Powell.

This site is named for John D. Lee, who established a settlement called Lonely Dell at the confluence of the Paria and Colorado Rivers. He managed a site where travelers could be ferried across the Colorado River. However, tradition holds that it was Jacob Hamblin and his associates who first successfully crossed the river on a raft and established the viability of a reliable crossing.

Lee’s Ferry was a key factor in establishing Latter-day Saint settlements in northern Arizona and New Mexico. On the east side of the river, pioneer travelers would work their way up or down an ascending stretch of lighter colored rock known as Lee’s Backbone. It was difficult to traverse, but without it crossing would not be possible. John D. Lee arrived at Lee’s Ferry in 1871.

Seeing the barren nature of their new homesite, his wife, Emma, exclaimed, “Oh my, what a lonely dell.”

They stayed at the dell and operated the ferry until John D. Lee was arrested because of his involvement in the tragedy at Mountains Meadows years before. Lee was executed in 1877 without returning to Lonely Dell. Beginning in 1877, when the St. George Temple was completed, Latter-day Saints in Arizona would utilize Lee’s Ferry on their journey to St. George to participate in temple ordinances. The route they took is known as the Honeymoon Trail.

DIRECTIONS:  From Fredonia or Bitter Springs, Arizona, take U.S. 89A to Marble Canyon where a bridge crosses the Colorado River. At Marble Canyon take the Lee’s Ferry Road to the parking area.