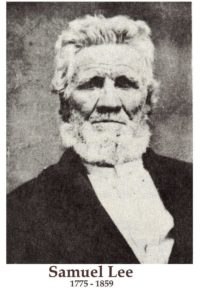 While william lee was not one of the four, he was a pioneer in his own right, for he left Ireland in 1765, married in Philadelphia and settled in North Carolina.  When his wife died, leaving him with four young children, he “adopted them out” to Quaker families in the neighborhood and joined the Continental Army.  While serving there, he met a British cannonball at Guilford Courthouse which cost him one leg.  After he recovered, he married the daughter of the family that took him and started his second family.

samuel lee, William’s fourth child, was raised by the quakers and, while he never joined them, he maintained good relations with them all of his life.  When the Quakers became very concerned with slavery, they commissioned Samuel to go the Ohio and find them a good place to settle.  He fulfilled this commission and settled there himself after marrying a Quaker girl, Elizabeth Gillium.  To them were born nine children, but only three of them, Alfred, Francis and Eli, will be part of this story.

In due course of time most of the family moved to Randolph County, Indiana and it was there that the family first encountered the restored Church in the early 1830s.  Samuel, Alfred, Francis and Eli all joined the Church.  The history of the Church in Randolph County speaks highly of Samuel and his family.

In 1834 the three brothers moved to Clay County Missouri, where they took up farms and settled down with the Saints.  As the Saints began to gather to Far West, the Lee families were quick to join them, but their stay there was short.  With the expulsion of the Saints, from Missouri they crossed the Mississippi River and settled near Quincy.  As Nauvoo began to grow, the three brothers again moved their families to the new gathering place.

In Nauvoo, Alfred’s oldest son, Isaac, met the most beautiful girl he had ever seen.  Her name was Julia Chapman and, much to his dismay, she was two years older than he.  This did not deter him and he began to court her.  They were married in Nauvoo on August 20, 1844.  To this couple were born three girls: Maryetta, Elizabeth and Eliza.

As the Mormon exodus from Nauvoo began, Alfred, not feeling well prepared for the journey west, crossed the river to Iowa and there took up a farm from a brother who was headed west.  While Alfred worked the farm, preparing to go west, Isaac worked in the lumber camps while his wife, Julia, lived with her parents.  The Chapman family did not live right in Nauvoo, were not planning on going west, and were not bothered by the mobs.

In spring 1849 Alfred prepared to make the journey west and sent word to Isaac to join them.  But Isaac had a problem, Julia was not sure she wanted to leave the security of her family and set out on the trail into the wilderness.  Isaac finally convinced her and they joined the Lee family on the trail.

We have left Samuel back in Indiana where he was still living with his family.  We are not sure when his wife died, but it may have been her death that started Samuel on his next expedition – he decided to go west to the gold fields.  So, as a hale and hearty man of 74, he packed up his gear, saddled his horse and headed west.  He crossed Iowa and was passing through Kanesville, when he heard someone call his name.  He looked up and saw three men running towards him.  It took him a moment to recognize them as his three sons, Alfred, Francis and Eli.  Samuel decided to forego the gold fields and joined the family in their westward movement.

The combined Lee family now headed west, but Isaac again had a problem.  His wife, Julia, was ill, seriously ill and was not able to bear the rigors of travel by covered wagon.  So Isaac and his family dropped out and returned to Kanesville.  The rest of the family continued west and were assigned to settle in the Tooele area where they were some of the earliest settlers.

Isaac spent the next three years helping Julia to regain her strength to where they could go west and rejoin the family.  In the spring of 1852 they felt that she was able to make the journey and they started out again.  They made it as far as Loupe’s Fork where Julia succumbed to her illness leaving Isaac with three little girls to care for and a long lonely road ahead of him.  With help from others in the train he continued on and joined the family in Tooele, thus making them the third and fourth generation of the family to cross the plains.

Francis and his family were called to Panaca where he died in 1866.  His grandson, Samuel Marion Lee later moved to Clifton, Idaho where their son Harold B. Lee was born in 1899.

Isaac, after settling in Tooele, married Mary Ann Bracken and they had ten children, eight of which were boys and six of them had the middle name of Bracken after their mother.

Of Isaac’s three daughters who crossed the plains with him, Maryetta died early, Elizabeth married Aaron Bracken, a brother to Isaac’s wife and when he died, she married William Henry Kennington.  Eliza married Arvet Lucius Hale, better known as Lu Hale to the inhabitants of Star Valley, Wyoming.  The two girls lived out their life in Star Valley.

The Lees never stayed long in one place.  In 1880 Isaac took his family and settled in Grouse Creek, up in the northwest corner of Utah.  In 1888, after a couple of years of bad drought, he moved again to Star Valley where his two daughters lived.  There was one final move to Marion, Idaho, a small farming community south of Burley, near Oakley and it was there he died.

Thus the Lee family is spread across the western states carrying forth the heritage of their pioneer forefathers.