For centuries Southern Paiutes had summered in this high lush valley where water and game were abundant. But the pastoral alpine setting we know today as Pine Valley was unknown to Euro–Americans until the summer of 1855—when a man in search of a cow stumbled upon it quite by accident.

In 1854, Brigham Young had sent missionaries to the southern edge of the Great Basin to establish the settlement of Harmony and to work with the Southern Paiute Indians there. Some of the missionaries spilled over the edge of the Basin, moving down the Virgin River to the confluence of the Santa Clara, where jacob hamblin began his legendary work among the Shivwits band of the Southern Paiute. It was a hot and barren country and the mission sought summer grazing ground for their cattle in the mountains to the north. In the summer of 1855, Jacob Hamblin’s brother, “Gunlock Bill”, and isaac riddle were caring for the mission cattle when one cow came up missing. Riddle left the herd in search of the cow. He trailed her higher and higher up the Santa Clara until he topped a hill and gazed in silent awe at the magnificent scene before him. He later stated, “There stretching before me was the most beautiful sight I had ever beheld on God’s green earth.” 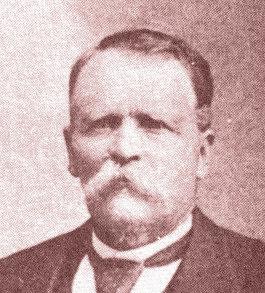 Isaac Riddle didn’t just find a lost cow that day—he discovered a valley that within a year would begin playing a vital role in not only the survival of the Indian Mission at Santa Clara, but the soon-to-be-established Cotton Mission at Washington and St. George. Ever since that day, this picturesque valley on the north side of the laccolithic dome known as Pine Valley Mountain has been crucial to the success of the communities of Washington County. It was the headwaters of the Santa Clara River, providing drinking water and irrigation to scores of settlers. It was prime grazing ground for beef cattle and an ideal location for producing much-needed dairy products. And it held an abundant stand of tall pine trees that provided the prime lumber needed to build the county and fuel its economy.

At 6,700 feet above sea level, Pine Valley was a stark and welcomed contrast to the searing heat of St. George, Santa Clara, and Washington at little more than 2,000 feet, but a mere 32 miles away. During a visit south in the spring of 1861, Brigham Young had a perfect view of Pine Valley Mountain when he stopped his entourage near the confluence of the Virgin and Santa Clara rivers and declared that someday a large city would fill the space between the two volcanic ridges streaming southward from the base of the mountain. By then Brigham was well aware of the bounteous resources of Pine Valley.

By March of 1856, Jehu Blackburn and Co. had erected a sawmill in Pine Valley. Blackburn, along with Isaac Riddle, C. W. Dalton, robert richey, and lorenzo roundy were turning out large quantities of high-quality lumber by 1857, providing Washington, Santa Clara, Harmony, and Pinto with lumber and shingles.

The southern settlers also discovered that Pine Valley was not only a good place for their cattle to summer, but also a place for themselves to find respite, as well. During the summer of 1856, LDS missionary to the Indians, Jacob Hamblin, spent as much time as he could with his family in Pine Valley. In early August his wife Rachel gave birth to a baby girl, Rachel Tamer Hamblin, the first white child born there. For decades thereafter, until air conditioning became common, many Southern Utah women spent their summer confinement in Pine Valley.

Among the 28 families that came to the town of Washington to grow cotton in 1857 were several who ended up in Pine Valley. John and george hawley, William R. Slade, Robert L. Lloyd, joseph hadfield, and umpstead rencher had proved that cotton could be grown in Washington, as well as sugar cane and other tropical plants. But by 1859, due to drought and limited resources in Washington, they were looking for greener pastures, and they found them, literally, at Pine Valley. Rencher ended up just north of Pine Valley in Grass Valley, where he established a very successful dairy operation that made him wealthy during the mining boom at Pioche, Nevada.

As the years passed, more and more people moved to the Pine Valley area to work in the lumber business and in farming and ranching.

The first meetinghouse in the valley, built in 1859, was a log building with a dirt roof. A post office was established the same year. With the onset of the Civil War in 1861, Brigham Young decided to enhance the Cotton Mission with the establishment of St. George. In late 1861, he sent 309 handpicked families to build a city on the same alkali slopes between the volcanic ridges where he had made his declaration earlier in the year. St. George would be the beneficiary of Pine Valley’s abundant resources and also a catalyst for growth in the mountain valley.

Erastus Snow, the apostle who headed up the southern mission, knew that Pine Valley’s resources would be vital to the success of the struggling communities. He called Robert Gardner to go to Pine Valley to take charge of a lumber mill. More than a century-and-a-half later, the names Gardner and Snow are still synonymous with Pine Valley.

Though Pine Valley was a summer Shangri-La, it was a difficult place to live year round. And even the summers could prove fatal when flash floods roared down the Santa Clara. One summer in the early 1860s, James Bracken and his sons Will and Bennett were working at a shingle mill in the valley. They heard a roar and looked up to see a wall of water crashing down through the gulch. A cloudburst on the mountain had sent a flood down the gorge. Bracken sent his boys down the valley to warn the people below, but the flood beat them there.

James Bracken’s wife, Sarah Head, was at the ranch down the creek. When she heard the noise she thought it was a hurricane. She rushed the family into a wagon box near the house. They held the cover down over the box to wait out the storm. Finally one of them peeped out and was horrified to see the flood. Water had nearly reached the top of the wagon box. They scrambled out and rushed up the hill, reaching safety just in time.

A little further down the creek Susan Allphin was putting her baby to bed when she heard the roar. In her fright and excitement she clutched her baby in her arms and with three other small children clinging to her skirts, rushed frantically downstream toward another house with the thunderous stream sweeping after her. As she reached the door a falling limb struck her arm, tearing the baby from her grasp. The current caught the three children at her heels and swept them, along with the baby, down the stream. It was not until the following day, after the water had gone down, that the bodies of the four children were found downstream hanging in the tops of cottonwood trees.

In spite of such hardship and tragedy, the town of Pine Valley slowly grew during the 1860s and ’70s. Practically all the lumber used to build the Mormon towns south of the Great Basin came from Pine Valley. It wasn’t until the 1870s that another lumber source was developed at Mt. Trumbull, Arizona, about 75 miles south of St. George, where lumber for beams of a length needed to build the St. George Temple were found. Meanwhile, some of Pine Valley’s excellent lumber was being used for very special purposes, such as construction of the stately Tabernacle in St. George. In fact, a certain type of yellow pine was found in Left-Hand Fork in Pine Valley Canyon, just the type needed to build the soon-to-be-famous organ in the Salt Lake Tabernacle. Robert Gardner went into the canyon and handpicked the trees according to specifications sent from Salt Lake City. The trees were felled and sawed into lengths suitable for hauling. Gardner’s daughter Sarah and William Meeks, who were planning to be married in the Endowment House in Salt Lake City, transported the logs north on their wedding journey.

But Pine Valley lumber was never put to a more worthy use than to build the beloved Pine Valley church and school. In 1868, the handsome building that still stands as a fitting symbol of the lives of Pine Valley’s settlers, was built under the direction of Ebenezer Bryce from Scotland who was living in Pine Valley at the time. The logs for the framework were handpicked from a grove of particularly tall, straight pines. They were hand hewn and put together with auger holes and wooden pins. The building’s artfully curved ceiling and the arch over the stage harmonized perfectly. The building’s simplicity of design was drawn from New England churches familiar to many of the town’s settlers.

Over 142 years later it still stands. It is one of the most perfectly designed and beautifully placed buildings ever erected by the Mormon pioneers. It still serves as a chapel.

After the turn of the 19th century the lumber industry in Pine Valley began to fade.

One classic story of that era is of Annie Johnson, a legendary woman from St. George who worked as a cook for the Pine Valley mill hands at Water Canyon in Grass Valley. One day in 1910, the mill foreman pointed toward an unusually large tree nearby and told Annie he would give her $20 and all the lumber in that tree if she could cut it down. Annie set straight to work and with almost superhuman strength and skill, she chopped the tree down with an ax. The lumber was sawed and given to her, along with the $20. But that wasn’t the end of the story. When the lumber arrived in St. George, it was immediately commandeered by the stake president to build the stairway in the new Dixie Academy. Annie Johnson’s “donation” to that building, which still stands on the corner of Main and 100 South in St. George, was part of the “Dixie Spirit” that built what is now, 100 years later, Dixie State College.

During much of the 20th century, Pine Valley was perpetuated by the ranching families who continued to utilize the lush valley meadows and the good forest grazing. Today, though much reduced, the ranching tradition continues in families that trace their Pine Valley roots back five or six generations. But more than anything, Pine Valley today is a bedroom community for people who work in St. George. The 32-mile commute is a small price to pay for the serenity, beauty, and cooler temperatures of this pastoral mountain valley. Though it might seem like a modern notion, it’s an idea Jacob and Rachel Hamblin came up with a long time ago.