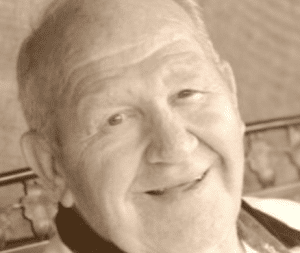 Karl Francis Brooks was born to Will and Juanita Brooks on November 7, 1935, in St. George, the ninth of eleven children. He lived until October 31, 2015

Karl grew up in St. George, attending Dixie High School and dixie college, where he played football, baseball, and was also student body president. In 1956, Karl left home and went to BYU where he played football, baseball, and received his B.S. and Masters degrees. After graduation, he moved to Mesquite, NV to teach history and coach football at Virgin Valley High School.

He had the chance to move home and came back to St. George where he taught at Dixie High School and then Dixie College. He then met the love of his life Carla Hoyt. They married in Kamas, Utah on June, 4th, 1965, and were sealed in the Los Angeles LDS Temple a year later on their anniversary.

Karl taught school in Pomona, CA before returning to Utah to get his Ph.D. in Educational Administration at the University of Utah. Degree in hand, Karl moved his young family to Monticello, Utah in 196 where he became Principal of Monticello High School and Assistant Superintendent of the San Juan County School District.

In 1971, Karl finally had the opportunity to return home to his beloved St. George to work and raise his family. For 25 years he served Dixie College as a teacher, director of high school relations, vice president, and athletic director. Everything Karl accomplished demonstrated his love for his community and his ancestors that settled there.

He served as Mayor of St. George for 12 years, during which the city grew from seven to 60 square miles in size and from 10,000 to 50,000 in population. Because of his key roles at both the city and the college, he was instrumental in getting the Dixie Center built. He also worked diligently to restore and preserve the local Opera House and art museum.

He was was president of the St. George Chamber of Commerce and the Utah League of Cities and Towns, and served as chairman of the Zion Natural History Association, the Dixie Center Control Board, and the Municipal Finance Cooperative Agency. As mayor, he was instrumental in acquiring three new golf courses, developed much public park space and a hiking/trail system. At Dixie College, he worked to increase major gifts, expand the campus, increase scholarship endowments and obtain funding for the athletic department.

Karl was known statewide as “Mr. St. George” and epitomized what has become to be known as the “Dixie Spirit.” He co-authored A History of Washington County, was in constant demand as a public speaker and received numerous education and civic awards.

Karl retired in 1997 but continued to love, support and serve his community for the rest of his life. After retirement, he also had the opportunity to serve two LDS Missions with his wife in Boston, MA and San Diego, CA. He served as a Bishop and in the Stake Presidency at Dixie College and was a faithful member of the Church of Jesus Christ of Latter-Day Saints.

Karl loved all sports, hunting, fishing and spending time in Pine Valley and at “the farm”. Above all, he loved every person he ever met, and everyone loved Karl. He had a great gift to remember names and faces and could connect people and families everywhere he went. He was happy and content every day of his life, and smiled through every difficult and painful experience. He continually lifted others with his smile and his kind words.

Upon his death, Karl was buried in the St. George Cemetary.