This article originally appeared in Vol.50 No.2 (2011) issue of Pioneer Magazine 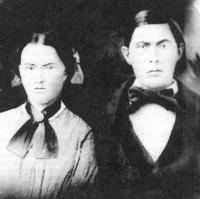 William Decatur Kartchner was born May 4, 1820, in Montgomery Co., Pennsylvania. In 1826 his father, John Christopher Kartchner, died, leaving his mother with five children in poverty. William and his brothers worked hard long hours, early and late, for poor pay and at times did not get enough to eat. William worked in a blacksmith shop, where during the winter he was called up at three in the morning to make fires and call the cook. Work started at daylight and continued until seven p.m. and occasionally all night.

William later went into partnership in Washington Co., Illinois, with his brothers, Peter, as farmer, John, as trader and William, as blacksmith.

On May 7, 1842, William was told of two Mormon elders 10 miles away so he saddled his horse and rode there, having previously read “Voice of Warning” by Parley P. Pratt. William stayed overnight and was baptized the next day, May 8. His brother John met him at the gate on his return and cursed him and the Mormons in such a manner for the next month that William left his brothers and went to Nauvoo, worked on the temple, and was baptized in the river for his father and other deceased relatives.

Margaret Jane Casteel was born Sept. 1, 1825, in Copper County, Missouri, to Jacob Israel Casteel and Sarah Nowlin Casteel. Margaret was a woman of fine intellect and sterling character, modest and refined in manner, deeply religious. She was baptized a member of the Church at 14 in Pike Co., Illinois. When she was 18, she married William Decatur Kartchner, on Mar. 17, 1814, in Nauvoo.

William set up a blacksmith shop at his father-in-law’s place. The mob was threatening the settlers and so he stood guard the greater part of the winter, and during a very wet spring he came down with rheumatism. The rheumatism became so severe that it afflicted him the rest of his life.

Margaret and William began their westward journey in September 1844. There was much hardship and short rations of food; rations were reduced to one gill of corn a day.

During the fall of 1845, William crossed the river and went on foot 60 miles to see his brother, John Kartchner. He gave them welcome and a comfortable home. William learned of a pioneer company leaving for the Rocky Mountains in the spring of 1846. His determination to join this company annoyed his brother John, who had made him fine offers of land if he would stay with him for five years. William told John, “I would rather be a Mormon’s dog than to stay in this county, when my people had been robbed, pillaged, murdered and now exterminating orders issued to them to leave the United States.”

They located at a spring about nine miles southwest of the city and began the usual building of the adobe house, fencing and farming the land allotted to them. Their food was very scarce. Their “bread stuff gave out” and so he had to kill his lead ox for food.

William and his family received a call Oct. 9, 1865, to go to the Muddy River. About every six months they moved to a new townsite (the old site washed out when the dams broke), until the winter of 1869 when they moved to Overton and then to Panguitch Mar. 20, 1871. William was called to organize a Sunday School and soon had about one hundred scholars. He set up a mail route connecting Marysvale and Kanab, as well as a post office at Panguitch. In 1874 Joseph A. Young organized a United Order, and William served as secretary and as a board member.

Margaret was always busy raising chickens, spinning, weaving and putting up fruit, both fresh and dried. By this time the family consisted of six sons and five daughters. Two sons and a baby daughter died in infancy.

At General Conference in St. George in 1877, William, his sons and sons-in-law were called on a mission to Arizona Territory, the Little Colorado River settlements. Floods swept away the settlements and the family had to move to the new settlement of Snowflake, Arizona, in 1878.

The family helped to colonize four of the western states. Now Snowflake was to be their permanent home. They took part in the activities of the new settlement, especially in the religious affairs. However, Margaret Jane Kartchner became ill and died on Aug. 11 at 56.

William Decatur Kartchner died May 14, 1892, in Snowflake. He had 21 children—his wife Margaret Jane Casteel had 11, and his wife Elizabeth Gale had 10.