This article originally appeared in Vol.65 No.1 of Pioneer Magazine

Between 1875 and 1910 The Church of Jesus Christ of Latter-day Saints sponsored thirty-three academies for secondary education in the western United States, Canada and Mexico. The academy system emerged in response to the need for sound schools in newly settled areas.

The core curriculum of the academy system emphasized basic subjects—reading, writing, and mathematics—together with relevant mechanical, homemaking, or agricultural skills, and cultural development through music, art or home crafts, and even gymnastics. Normal courses (a traditional name for teacher education) were added later to the curricula of mature academies designated to prepare young people to become primary or secondary school teachers. Ultimately, most academies granted four-year high school diplomas to graduating students. The academies also served as cultural centers in their respective communities, and their sports and fine-arts programs often involved adults as well as children and youth.1

When the juarez stake academy opened in Colonia Juarez in 1897 it naturally shared a mission and history with other Church-sponsored academies. Beginning in 1885, each of the original Mormon colonias had organized its own elementary school. As Nelle Spilsbury Hatch observes, “A spirit of learning actuated the early leaders” in Mexico, who were “ambitious to have the best for their children.” Accordingly, “schools became their first concern,” and “immediate provisions were made” to secure teachers and open rudimentary classrooms. Hatch continues, “In the short period of ten years, ten hard years, progress was made from a one-room ungraded school in a crude building” at Colonia Juarez to the “establishment of an accredited high school” there.2

This high school, the Juarez Stake Academy, was necessarily preceded by the December 1895 organization of the Juarez Stake with Anthony W. Ivins as president. At the first meeting of the local board of education, of which he automatically became head, Ivins proposed that “education in the Juarez Stake be centralized” and that this objective be met through four specific measures:

In September 1897 Dr. Karl G. Maeser, general superintendent of the Church School System, formally installed Guy C. Wilson, a young law student from Brigham Young Academy in Provo, Utah, as principal of the Juarez Stake Academy. Wilson was also named inspector of the elementary schools in the Juarez Stake—which had a combined enrollment of 176 students. Students in the colonias had been ranked according to reading ability, but Wilson soon changed this “reader” system to the more traditional age-based grade system, and by the end of his first year the Juarez Stake had a primary-school enrollment of225. Fifteen students graduated from the eighth grade in the spring of 1898, and that autumn these fifteen became the first ninth-grade class in the new Juarez Stake Academy.4 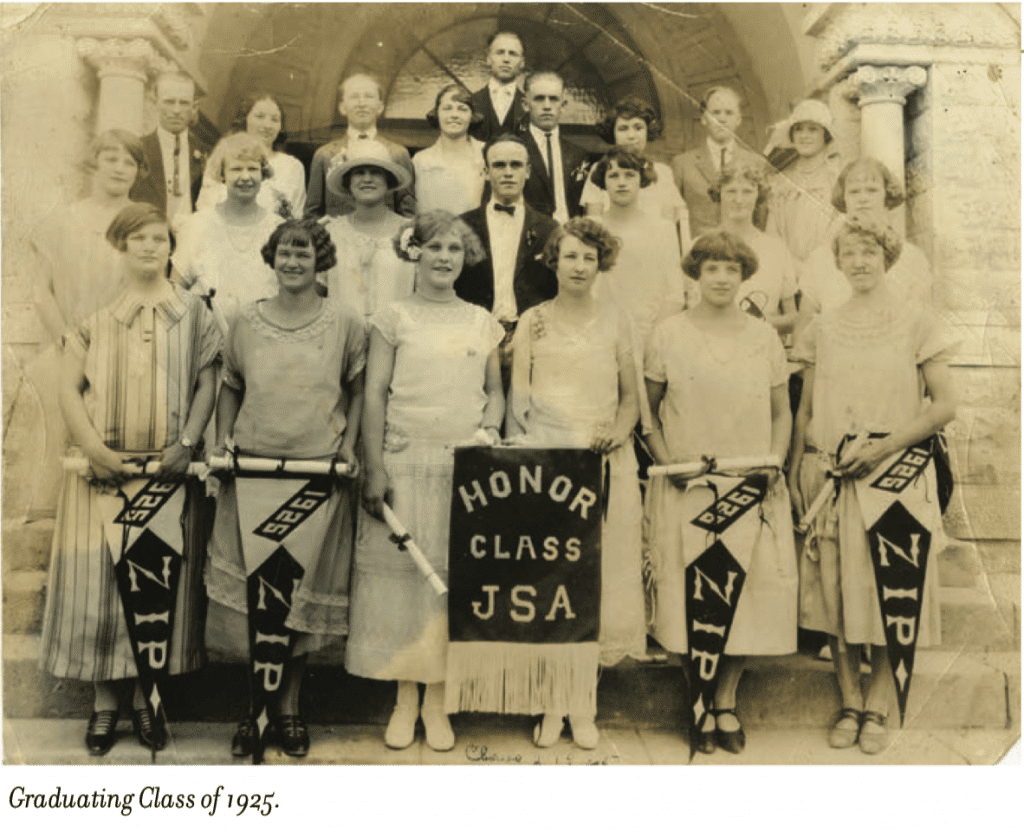 By 1903 the enrollment at the Academy had swelled six-fold to nearly one hundred students, and the original building could no longer meet their needs. The school board determined that a new building would be constructed as soon as possible and a meeting was called to present the plan to the community. After explaining the purpose of the meeting, President Ivins set its tone by donating a five-acre lot as the building site. “It’s the place for my dreams to materialize,” he declared, “and a chance to let you see the picture I’ve had in mind ever since my first visit to the town.”5 He spoke of an Academy campus with multiple buildings, sports fields, and trees, a campus that would meet the academic and fitness needs of students as well as the cultural and recreational hopes of the community.

By the close of the meeting two hours later, every person in the room had pledged donations of cash or labor totaling $12,000. Ground was broken for the new building in late December of that same year, the cornerstone was laid in early January 1904, and the doors were opened for classes in September 1905. Shortly after classes began, the building was dedicated by LDS Church President Joseph F. Smith.6 In 1908 high school diplomas were issued to the nine students in the first graduating class of the new campus.7 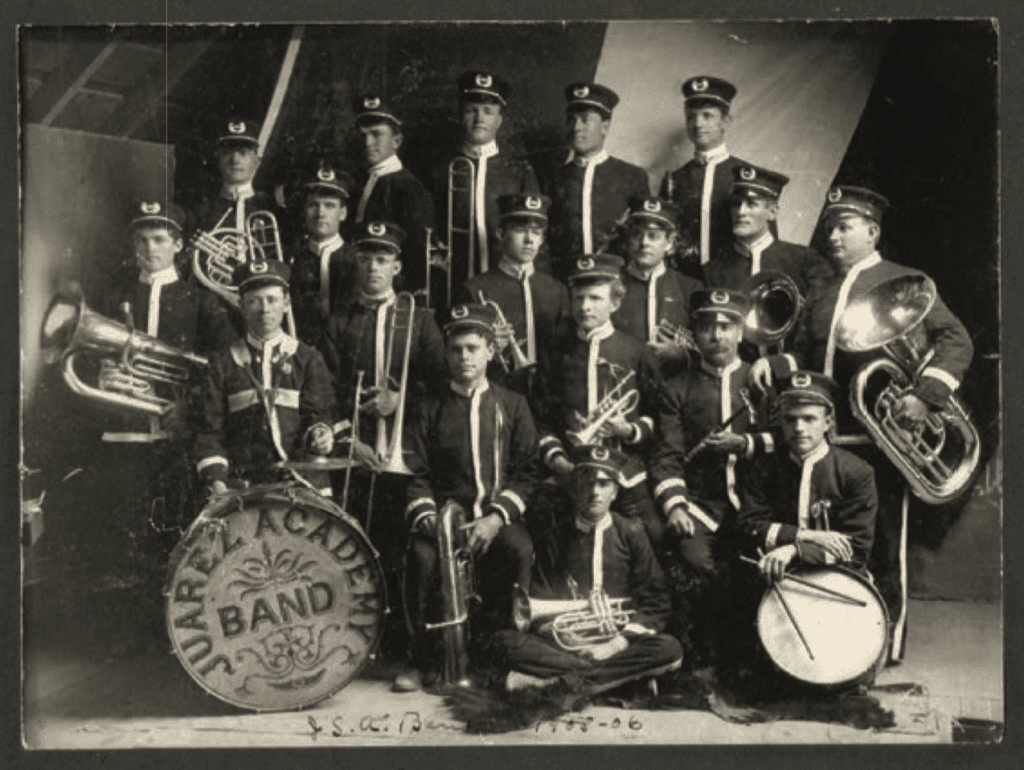 By 1912 there were twelve graduates, and prospects for growth were encouraging. In an address to students earlier that year, Superintendent Wilson had expressed great expectations for the future of the Academy: “In the history of our institution we have never faced a year so full of promise as the one now before us. Everything is propitious: good crops, good employment, good health, a strong faculty engaged, and there is no reason why we should not have the greatest enrollment ever. Experience has proven that but little money is needed if you only have the determination to work. There is nothing to be gained by going out of Mexico for anything that is taught in the Juarez Stake Academy. On the contrary there is every reason why we should all support our home institution and make it the pride of our people and a credit to Mexico. RESOLVE! WORK! COME!”8

Nevertheless, for nearly two years, the Mexican Revolution had been a troublesome fact of life for the colonists. And within weeks of Wilson’s speech, it grew into a serious threat to property, religious freedom, and life itself. Many of the colonists began making plans to leave Mexico, and as more and more Saints joined the exodus to the United States, the Academy temporarily ceased to function. Even Professor Wilson removed his family from Mexico, never to return. 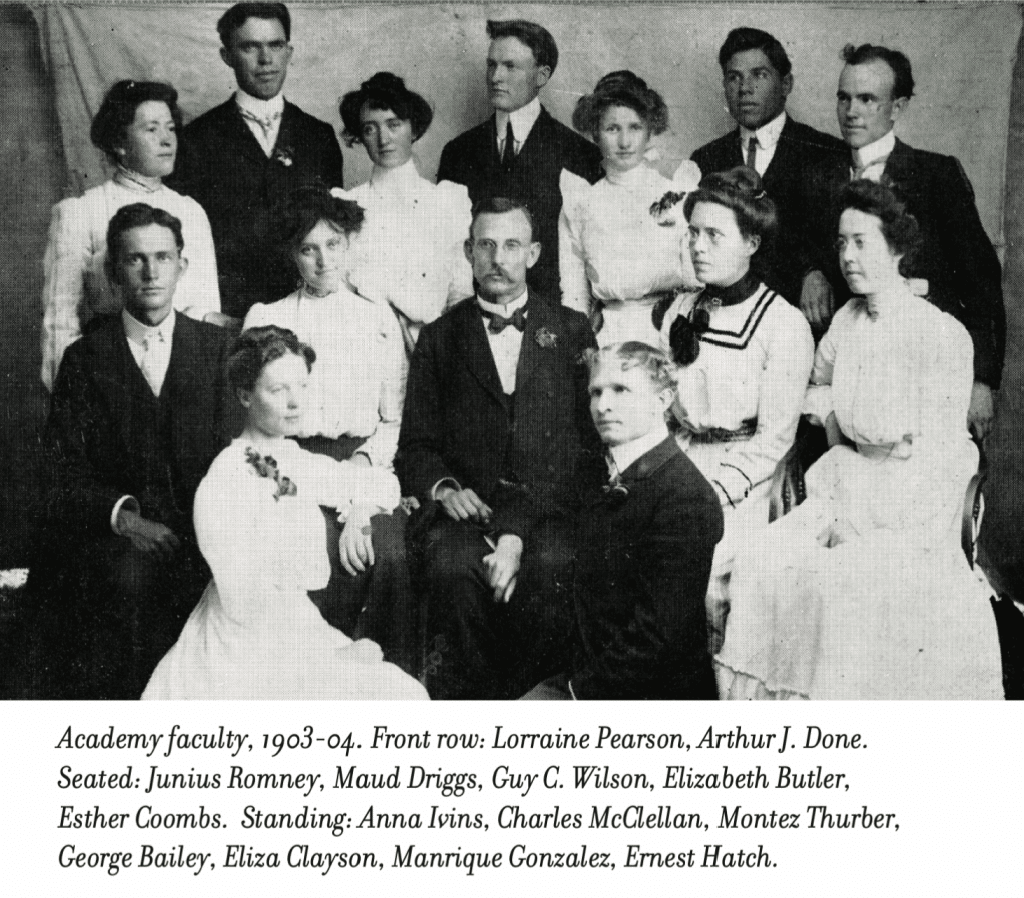 Within a year, however, some families had returned to the colonies, and, despite periodic raids on the colonies by roving bands of revolutionaries, classes at the Academy resumed in September 1913 and continued through the next decade and more without a break. The first post-exodus commencement exercises were held in the spring of 1915 with three graduating seniors.9

By 1920 the Revolution was winding down, and more families were returning to or settling in the colonies. Enrollment at the Academy continued to increase—and the next fifty years saw several new buildings added to the campus to meet the needs of larger student populations. One of the new buildings was a gymnasium/ auditorium dedicated by Elder Marion G. Romney in December 1963. In an address at the dedicatory service, Elder Romney shared his conviction that the Academy “has a great future and an important mission to perform in this land.”10 In the dedicatory prayer he petitioned, “Let this institution shine forth in the earth and be a light to all the people of this great Republic, and let its influence reach into every part thereof.””

Through the early 1960s, the Academy was not an officially accredited school. The process of incorporating the seventh, eighth, and ninth grades (secundaria) with the Chihuahua State Department of Education was finally completed in 1963. The Academy was now officially known as Academia Juarez, A.C.12 The tenth, eleventh, and twelve grades (preparatoria) were incorporated with the University of Ciudad Juarez in 1980,13 insuring that both Mexico and the United States would recognize the validity of credits earned at the Academy. This accreditation has attracted increasing numbers of native Spanish-speaking students to the Academy, many from the surrounding region and some from throughout the state of Chihuahua and from larger Mexico.

While about one-fifth of enrolled students are not members of the LDS Church, they find the Academy’s bilingual and bicultural education in a safe, value-centered environment to be highly appealing. A few non-member students ultimately join the Church, but virtually all remain loyal to their alma mater, returning often for cultural programs, sporting events, or class reunions. Such alumni relationships frequently open political, social, and business doors for the Academy and for the Church. This fact, together with the numerous graduates of the Academy who have served LDS missions across Mexico and Latin America, underscore the historic mission of the mexican colonies and of the Academy itself.

The Juarez Academy has long been a cultural center for the northern region of Chihuahua, and musical and dramatic presentations showcase the students and their school—and the communities that sponsor them. Musicals such as The Sound of Music, South Pacific, Fiddler on the Roof, and Seven Brides for Seven Brothers are favorites of the Academy stage—as are dramas including A Man for All Seasons, Little Women, and La Tia de Carlos. At times, student groups are invited for traveling performances in places as far away as Mexico City.

Over the years, a variety of dignitaries have visited the Academy, ranging from revolutionary generals to Apostles of the Lord. Visitors are graciously received and entertained by students and community members, and most visitors leave with warm, indelible memories of their experiences. A significant visit occurred in November 1989 when President Carlos Salinas de Gortari became the first Mexican president to make a stopover at the Mormon colonies. Residents remember that it was truly striking to see five large military helicopters sweep into the valley and land on the campus of the Academy. Several hundred guests, including students, joined President Salinas for dinner in the Academy auditorium, and the Academy band performed a brief concert in his honor. Studentbody officers had the singular opportunity of presenting President Safinas with a Book of Mormon and Academy memorabilia which he graciously accepted.15

The 1997 visit of LDS Church President Gordon B. Hinckley during the Academy’s centennial celebration will long remain a crowning event in the history of the school. Many campus buildings had been recently remodeled and their rededication was scheduled concurrently with the centennial celebration and commencement exercises in early June. In his address to graduates, President Hinckley declared, “I cannot begin to tell you what an honor it is to be with you on the occasion of the one hundredth anniversary of the establishment of the Academia Juarez,” noting that “here generations of pupils have come to learn. Here in an atmosphere of faith and an environment of learning they have come to equip themselves for the future.”16 Counseling graduates who had “lived in this chosen and quiet community” and who would now “go forth into the noisy and busy world,” President Hinckley suggested they adhere to four values that would “bring happiness throughout their lives”: to “keep the faith,” to “serve the Lord,” to “prepare for a good marriage and a solid home,” and to “never stop learning.”17 In the concluding lines of his dedicatory prayer, President Hinckley pled: “God bless this graduating class that they may go forth to accomplish great things in the world May peace be in these communities.

May there be security and place of refuge from the world. May those who live here be blessed with the good things of life and may those who go from here always have beautiful memories of their time of residence here We rededicate ourselves to Thy cause as we rededicate these facilities and ask that Thou will accept of them for the blessing of Thy people.”18

More than two decades after President Hinckley’s historic visit, the Academy continues to flourish. While the demographic makeup of its student body has shifted, with 90% of the students now coming from native Spanishspeaking homes and 10% from homes of descendants of original Anglo-Saxon colonists, the same spirit of dedicated preparation for service continues to motivate students to strive for excellence. They are eager to acquire training enabling them to become bilingual and bicultural ambassadors for the Church and righteous citizens who will strengthen their families and communities throughout the great nation of Mexico and across the world.