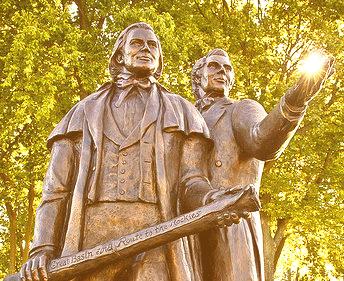 RECENTLY published magazine article on the great exodus of the Mormon Pioneers, credited the whole idea to brigham young, the master colonizer who moved the entire body of the “Saints” to the heart of the Great Basin.  This is in error.

It can be shown beyond question that had the Prophet joseph smith lived a few more years he would himself have conducted the movement, irrespective of the difficulties that subsequently arose at Nauvoo and the neighborhood.  Nor is it detracting anything from the greatness of President Young to ascribe to Joseph the credit for conceiving the idea of the exodus.

The labor and genius involved in the actual removal of the Mormon people from Illinois to the Rocky Mountains and of their subsequent settlement through the Intermountain West will ever be a sufficient justification for calling Brigham Young one of the foremost colonizers of modern times.  The laurel sprig is securely fastened upon his brow.

There are strong indications that certain leading men in the Church at that time realized that Illinois was to be only a temporary home for ‘ Mormonism.’  The Church faced problems which could not be resolved in the crowded East.  It required isolation, at least for a time, to develop its latent powers and to show the world that it was truly a religion of force and vitality.

That this view of the situation was correct can be shown by predictions uttered at the time, and by positive actions of the Prophet Joseph looking toward the settlement of the West by the Church.

Joseph Smith predicted in the clearest possible terms the westward migration of his people. Writing under date of Aug. 6, 1842, he said: “I had a conversation with a number of the brethren in the shade of the Masonic Hall at Montrose on the subject of our persecutions in Missouri and the constant annoyance which has followed us since we were driven out of that state.

I prophesied that the Saints would continue to suffer much affliction and would be driven to the Rocky Mountains; that many would apostatize, others would be put to death by our persecutors or lose their lives in consequence of exposure to disease, and some of you will live to go and assist the Saints to become a mighty people in the midst of the Rocky Mountains.”

Lorenzo D. Young records in his journal that while he was very ill in Kirtland in 1831, the Patriarch hyrum smith gave him a blessing in which he promised Lorenzo that he would recover and go with the Saints to the Rocky Mountains.  And Heber C. Kimball commenting on the beauty and charm of Nauvoo once said: “A beautiful place, indeed, but not for long an abiding place of the Saints.”