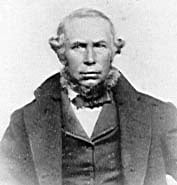 Joseph Johnson Smith showed great courage while in Nauvoo, just as the Prophet Joseph Smith did. He and his wife, Mary, came from England in 1843 with two small children, Caroline 2 years and Mercy 8 months. It took them two months on the ship Montreal to sail from England to America. Often these immigrants were in very cramped spaces in the hold of the ship. Storms made the boat rock and often made the passengers very sick. Besides Joseph’s little family, Joseph’s parents and six siblings made the journey with them; twelve in all. After they arrived in New York in July 1843, they had to travel over 1,000 miles to Nauvoo, Illinois.

They traveled by boat down the rivers and on horse-driven carriage when the river ended. How happy they must have been to be in “Joseph’s City”. But the happiness didn’t last long. Within three months after arriving in Nauvoo, little Mercy became ill and died. Joseph’s wife, Mary, grieved with Joseph, but within two months, she and Joseph became excited again because she was going to have another baby. But again, the excitement was blunted by death as Mary died a week after her baby son, Joseph, was born and baby Joseph died twelve days later. Joseph now was left with just three year-old Caroline. His parents and two sisters and three brothers were still with him in Nauvoo, but how hard it must have been to have sacrificed so much in such a short time.

Joseph’s mother, Sophia, helped take care of Caroline, but a year later, Sophia also died leaving 6 motherless children for Joseph and his father to care for. When Brigham Young encouraged the Saints to leave Nauvoo and move West in 1846, Joseph heeded the call and took little five year Caroline with him. One of his younger sisters died in Nauvoo. His two older sisters also left Nauvoo, but his father and brothers stayed behind in Nauvoo and never joined the Pioneers in their move to Utah. Joseph was asked to stay in Iowa for three years and help build wagons for the Saints to travel west. His occupation as a blacksmith was very valuable as thousands of wagons wheels had to be constructed with iron rims for the journey west. In 1850, he married Ann Coleman, a woman from his old Nauvoo ward who was just 7 years older than 9-year old Caroline. Together the three of them crossed the plains and were invited by his former Nauvoo bishop, David Evans, to settle in Lehi, Utah.

Joseph build a log cabin on Dry Creek near the present Lehi Rodeo grounds. When Brigham Young advised the Lehi Saints to “fort up” to protect themselves from Indian attacks, Joseph moved his cabin and blacksmith to the fort area. His lot is now identified as Main Street and 4th North, just east of the railroad tracks. At first the cabins standing side by side became the fort protection, but then an eight foot wall began to be built around the entire area that turned out to be four blocks square. As Joseph’s family grew, he built onto his house adding a 2nd floor and an expanded kitchen.

Joseph and Ann had 14 children, 10 of whom lived to maturity. He married a second wife, Sarah Ann Liddiard, in 1865, shortly after she emigrated alone from England. Sarah had two children, one of whom lived to maturity. From the three wives Joseph had 19 children and 101 grandchildren. Today his descendants number over 4,000. In the 1880s, Joseph and Ann moved to northeast Lehi into an adobe home he called “the mansion”. He had homesteaded 160 acres in this area and besides fruit crops and grain, he raised sheep. He moved his blacksmith shop from downtown Lehi to his new home. Sarah, his third wife, stayed in the original home and she taught school. First a store and then a hotel were built where the blacksmith shop stood. Sarah and her daughter Florence ran the hotel for a few years before the property was sold. The Hotel and the original Smith home still stands in Lehi, as does the mansion house.

Joseph’s father, William, returned to England, remarried, and had two more sons. Joseph’s three brothers and one sister moved to British Columbia and were some of the early pioneers of this area. The remaining sister married in Salt Lake City, but died young in childbirth. One daughter grew to maturity from that marriage.

Joseph always relished his acquaintance with the prophet Joseph Smith in Nauvoo, and when Joseph died in 1901, his Deseret News obituary read “He Knew the Prophet Joseph”. He retained his testimony of the restoration even though his family did not join him in Utah. Courage and faith were his watchwords. One of our favorite Pioneer hymn is “Faith in Every Footstep”. Joseph Johnson Smith is a Pioneer who demonstrated that type of faith and courage when things got very hard.