This article originally appeared in Vol.60, No.1 2013 issue of Pioneer Magazine 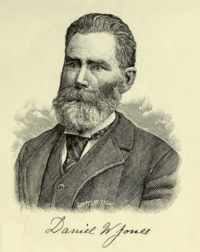 Daniel Webster Jones was born August 26th, 1830, in Booneslick, Howard County, Missouri. Orphaned at the age of 12, he joined a group of volunteers to fight in the Mexican-American War in 1847.

While camped along the Green River in 1850, his pistol went off in his holster, piercing through 14 inches of his groin and thigh. His companions left him, lame, but alive, with a Mormon settlement in Provo. There, he studied Mormon doctrine and was baptized by Isaac Morley on January 27th, 1851.1 The next year he married Harriet Emily Colton, daughter of Philander and Polly Colton.

In the October 1856 general conference Brigham Young informed those gathered that a group of Latter-day Saint immigrants were stranded on the plains of Wyoming. These were the Martin and Willie handcart companies, as well as the Hunt and Hodgett wagon companies. The next day, about 25 men departed from the Salt Lake Valley to find the immigrants.

The company found the Willie Handcart Company near South Pass. After reaching Devil’s Gate, they still hadn’t found the other groups, and Jones, Joseph A. Young and Abe Garr were sent ahead to find the missing parties and help them in to the Devil’s Gate area. After assisting them to a spot now known as Martin’s Cove, it was determined that Jones, Thomas Alexander and Ben Hampton would remain behind with the goods cached at Fort Seminoe, together with 17 teamsters detailed from the Hunt and Hodgett wagon companies.

During that winter they endured terrific privations, which Jones later detailed in his autobiography.

In 1874, Jones was commissioned by Brigham Young to translate selections from The Book of Mormon into Spanish in preparation for a missionary expedition into Mexico. This he did, with the assistance of Henry Brizzee and Milton Trejo, a recent Spanish convert from the Philippines. Following the translation, the company, including James Z. Stewart, Helaman Pratt (son of Parley P. Pratt and father of Rey L. Pratt), Wiley C. Jones (Jones’s son), R. H. Smith, Ammon M. Tenney and Anthony W. Ivins (who would later become an Apostle and First Counselor in the First Presidency) departed for Mexico. The mission lasted from 1875 to 1876.

Upon returning, Jones was commissioned by Brigham Young to start a settlement in the Salt River Valley of Arizona. Originally called Jonesville, the settlement was later renamed Lehi and was eventually incorporated into Mesa, Arizona.

After some conflict with the other settlers, Jones moved to the Tonto Basin area, where his wife and youngest child were killed when a shed fell on them during a storm in 1882. In 1890 he published his autobiography, Forty Years Among the Indians. He died on April 20th, 1915, of gangrene after an accident and was buried in the Mesa City Cemetery.2 He was 84 years old.