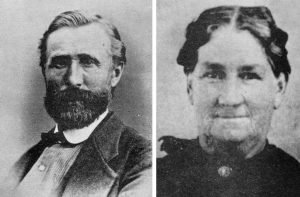 John Harrison Maughan was the father of my grandfather, Harrison Maughan. He was the eldest son of the first Maughan pioneers, Peter Maughan and Ruth Harrison. John’s birth in Alston, Cumberland, England on 8 October 1830 was just six months after the organization of the Church of Jesus Christ of Latter-day Saints, which was such an important part of his later life. John was eleven years old when his mother, Ruth Harrison, died in England. Of necessity, he quickly became a man, and emigrated to Nauvoo with his father and five motherless siblings.

With his father, Peter, and his stepmother, Mary Ann Weston, he experienced the final agonizing days of Nauvoo, then worked in coal mines and lead mines until the family was able to go west in 1850. As a twenty year-old, John drove one of the six teams of oxen, pulling one of their two covered wagons. When the dreaded cholera broke out in their company, John and his brother, William, with two other teen age boys were assigned to bury the dead, with a promise that they would be spared from the disease. They were the only ones allowed to touch the bodies of the sixteen persons who were buried. Providentially, none of the four boys became ill.

While living in Tooele, John met and married Sarah Mariah Davenport. Sarah Mariah had been born into a large family on 22 November 1836, in Fentonville, Genesee County, Michigan. Sarah’s family came to the Utah Territory in 1850. John and Mariah (as she was usually called) were married on July 24, 1853. Thirteen children were born to this marriage.

In September 1856, when Peter Maughan and his family were called by Brigham Young to settle in Cache Valley, John and his wife and their first two children went as one of the seven families in the company. Another of the settlers at “Maughan’s Fort” (later named Wellsville) was John’s brother, William.

John’s family stayed in Wellsville for seven years. My grandfather, Harrison Davenport Maughan was born there. John Maughan was well respected and became the first Treasurer of Cache County. In October 1863, John took his family over the mountain to Bear Lake with Charles C. Rich, to establish the new town of Paris, Idaho. Then in 1865, they were one of seven families who moved to a permanent home in Cache Valley, where they homesteaded some excellent land in a new settlement which became the town of Weston, Idaho. When the ward was created in Weston, Sarah Mariah was called as the first Relief Society President. She was a robust, healthy woman and loved horses and the out-of-doors.

John Maughan loved this land, became fairly prosperous as a farmer and built a nice home for his family. He served for eight years as bishop and two terms as Justice of the Peace. Many Indians frequented the area, some peaceable, some not. There were frequent demands from them for food and other things, which the settlers met as fully as they could, rather than fighting them. John’s fair treatment of them eventually won their respect and friendship. After they had proved they were reliable, he even loaned them his guns, and they brought gifts to his family.

Mariah learned midwifery from her mother-in-law, Mary Ann Weston, the second wife of colonizer, Peter Maughan. She was set apart for her midwifery duty by Peter Maughan and spent many successful years in this service. She earned little pay except hearty thanks, and brought almost all her patients safely through their ordeal. It was expected that a midwife might be available for other medical service. During a winter epidemic of boils, which seriously afflicted both children and adults, Sarah Mariah had a dream one night in which she saw a blue mold under rose bushes. The next day she and John went to an area where wild roses grew abundantly, scraped away the snow and found the blue mold. They collected a quantity of the substance, brought it home and made poultices which, when applied, completely cured the boils. Later, people wondered if this might have been a form of penicillin. But without question, it was a gift of Divine Providence.

John married his second wife, Mary Nibley, in 1863, and two children were born to them. Mary’s birthdate was 4 May 1836. In 1868, another wife joined the family, Hannah Sophia Toombs, who had been born on 15 January 1848. One child was born to this union. It may have been that Hannah was unhappy in a polygamous marriage, but in any event, this marriage ended in divorce.

By 1875, great pressure was being exerted by the U.S. government against families

involved in polygamy. John was advised to leave Cache Valley with his second wife, Mary, and one daughter, and go south for a time. In Kanab, he was called to serve a mission to the Zuni Indians in remote northern New Mexico. Sadly, in May 1877, while they lived in Savoya, New Mexico, a tiny town where medical help was unavailable, Mary and her second child died during childbirth. John took his other young daughter with him to visit the Colonies in northern Mexico, but decided against moving there and returned to his surviving wife and his children in Weston.

The succeeding years were quite prosperous ones for John’s family. As a contractor, John helped build the Northern Railroad into Cache Valley, the Utah and Northern Railroad into Montana, and parts of others. With their draft animals and heavy equipment, he and his sons also built canals for irrigation His equipment was also put to good use in hauling freight.