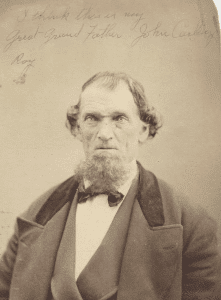 The year 1800 began the nineteenth century with some notable events. The Italian physicist Alessandro Volta invented the electric battery, providing the first source of a continuous circuit. John Chapman, better known as Jonny Appleseed, began scattering religious tracts and apple seeds in pioneer communities throughout the American Midwest. In that same year, John Carling was born and began his quest which would leave a legacy of his life with thousands to follow. He was the son of Abraham and Sarah Freer Carling and was welcomed into the world by two older sisters. Two years later, his sibling inequality balanced out with a new baby brother.

Kingston is located along the Hudson River about 100 miles north of New York City. It is a beautiful, green area with rolling hills and numerous lakes and rivers. As a young man, John moved eight miles southeast to the town of Esopus. He learned the trade of carpentry and joined Dutch Reformed Church while in that small community. Records don’t tell us how John met Emeline Keaton, but we know he married her on 1 Sep, 1830. Emeline was the daughter of Jacob and Catherine Joanna Paine Keaton, who had been in New York State for several generations. In fact, both the Carling and Keaton lines had been in the southeast part of New York state for several generations. The Carling blood line is said to be from the Puriton Fathers, descended from the Huganots, who left France at the time of the Reformation and went to Belgium and Holland and then to America. The Keaton line is reported to be of Dutch descent.

John and Emeline remained in Cline Esopus, Ulster, NY until at least July, 1835 because their first three children were born there and their third was born in June, 1835. Their fourth child was born in Poughkeepsie, Dutchess, NY (just a short distance south of Esopus) in August, 1837, so they had moved there by then. The details of how John and Emeline met the missionaries for the Church of Jesus Christ of Latter-day Saints have not been found yet, but the Nauvoo Seventies record shows John Carling being baptized on 5 Jan, 1840. Elaine Johnson’s bibliography of John Carling states that he was in Saugerties, Ulster, NY at the time of the 1840 Census, which was 6 months after his baptism, so he was baptized by Joseph Ball in the Hudson River in either Esopus or Saugerties. Part of his own account is recorded in her brief record:

“I lost my father in early life but I was always inclined to fear God and keep his word. I removed from Kingston to Esopus where I learned the carpenters trade, and while a single man I joined the Dutch Reformed Church; and in 1830 was married to Emeline Kaiton, and in 1838 I removed to Dutchess County, NY; and in 1840 Jany.5 was baptized in the Church of Christ by Joseph Ball. In Jany. 29, 1842 I was ordained by Hiram Smith and Elder. Residence Nauvoo.”

We can follow John & Emeline after their baptism by the record of his great granddaughter who gave the following report in school when she was 12 years old: “In 1840 and the age of eight my grandfather (Isaac V. Carling) with his parents, sister and brother, made a trip from Fishkill on the Hudson River to Nauvoo, Illinois. Before leaving their home in Fishkill, grandfather’s Uncle, who was a sailor gave them some sea biscuit. The dough of the sea0biscuit had been mixed so that it could not be spoiled by the dampness. It was very hard, and had to be pounded up and soaked before it could be eaten. As they had not yet heard the Word of Wisdom taught, they used coffee, which the biscuit was soaked in.

When they were ready for their journey, they sailed down the Hudson River to New York where they visited their relatives. While there my grandfather visited with his great grandmother, a privilege which very few children have now. When he was visiting his grandmother and great grandmother, some Elders of the Latter Day Saints Church came there and stayed overnight. His grandmother went to show them where they were to sleep, and as they passed his great grandmother’s room, she asked ‘Is dat de Mormons’ and his grandmother said ‘shh’. Then great grandmother said ‘well, I didn’t see der horns.’ After visiting in New York for some time they sailed back up the Hudson river to Alban, and from there to Buffalo, by way of the Erie Canal. Then they sailed down Lake Erie to Cleveland and crossed over to the Ohio River. Sailing down to the mouth of the Ohio, then up the Mississippi, passing the Missouri. They arrived at Nauvoo after traveling over two thousand miles on steamboats, sloops, and canal boats.

John was a skilled carpenter, cabinet maker, mason, tinner, cooper, blacksmith, and shoemaker. While in Nauvoo, he did a good deal of work on the temple. According to the Historical Record, “President Smith approved and accepted a draft for the font made by Brother Wm. Weeks.” His acceptance led Weeks to stop other architectural activities and begin carving a set of twelve oxen to support the proposed font. After laboring six days, he assigned Elijah Fordham, a convert from New York City, to complete the carving. Elijah, assisted by John Carling and others, spent eight months perfecting the oxen and the font and completing the ornamental moldings for the baptistery area of the Nauvoo Temple.

This record does not mention John Carling, but the following is quoted from the Heart Throbs of the West:

“While John Carling was carving beautiful work on a mantle in Nauvoo, Brigham Young came to him and asked if he couldn’t make a pattern of an ox as they wished life-sized oxen on which to rest the baptismal font. Brother Carling went home and drew a picture of one of his own oxen. He then pinned planks together with hardwood pins and glue and taking his carpenter’s pencil, saw and drawing knife, he carved the first pattern of the first oxen used in Latter-day Saint Temples. John was a modest man, never seeking honor, thus this instance is not recorded in the Church history, but this is a true story nevertheless.”

Life was good for a time in Nauvoo, but the Carling family ran into great misfortune in 1844. Emeline gave birth to their last child, John Warner, on 14 Nov, 1843, but the birth was very hard on Emeline, so she suffered a great deal. Somehow, they had become acquainted with Anne Green Dutson while in Nauvoo, and she helped nurse Emeline over the next two months. Unfortunately, the struggle was more than Emeline could endure, so she passed away on 1 Jan, 1844. This was a very hard time for this family.

Nevertheless, life went on. Ann Green Dutson had been abandoned by her husband, so she helped this family through their time of mourning, and eventually she and John were married. She became a devoted wife and mother to the young family and also brought two of her own children into that new family. Subsequent years saw two more children added to their family.

Ann Green Dutson had the distinction of having Joseph Smith set her apart as a midwife. He told her that she would be successful if she used herbs in her work. She soon gained the reputation of “herb doctor.” A partial list of her remedies includes:

When the Saints were being driven from Nauvoo, John Carling & his son Isaac V. Carling worked at making and mending wagons for the exiled saints so they could move out of Nauvoo. The mob violence became so intense that the Carling family decided to leave with the main body of saints. Brigham Young sent Heber C. Kimball to inform John that, if he would stay until all of the saints had been provided with good outfits, not a hair of their head would be harmed. They remained as requested, though some wives complained that they would all be killed.

“The morning they were to leave, they were counseled to get to the ferry boats before the mobs were astir, and upon arriving at the ferry, the captain hurried them onto the boat and admonished them to be quick because they could see the mobs coming. Some were on horses, and others running, but all with guns in their hands, and they were cursing and swearing. As the saints left the shore, they could hear the leader of the mob ordering his men to shoot. But as the men came to the shore, they stood still. It is told by some that two shots were fired but they missed the people in the boat. Thus the hand of the Lord was with the saints and they were protected.”

For some reason, their exodus carried them to Pottawattomie County, Iowa, where they stayed for awhile before going on to Winter Quarters. It is known that Winter Quarters was over-crowded so perhaps the Carlings heard this news and stopped sooner. Nevertheless, they were in Pottawattomie county until 1850, as shown on the census records for that county. They moved on to Winter Quarters and headed out with the Henry Miller Company on 30 June, 1852. The journey took three months and records show them entering the Salt Lake Valley on 30 Sep, 1852. They were a short time in Salt Lake City, then a short time in Provo, then Brigham Young asked John to move to Fillmore to help build the new state capitol there. He and his family moved to Fillmore on 29 Nov, 1853, and remained there for the rest of his life.

John was sheriff for some time, a Judge of the Court, and a bishop’s counselor. In Dec, 1854, John served as a Representative of the Territorial Legislature and served on a committee on Counties. Since the new State Capitol wasn’t yet complete, he attended meetings of the Legislature in Salt Lake City. On his return from one such meeting in 1855, he caught a severe cold which later turned to pneumonia and John Carling died 2 April, 1855. He passed away quietly while the world was watching Ras Kassas, Ethiopian ruler, conquering neighboring regions and establishing himself as ruler. John Carling was a faithful saint that contributed a great deal to the exiled saints who needed wagons for their journey west. Many family histories have a brighter ending because he got those pioneers on the road when they were so desperate for help.