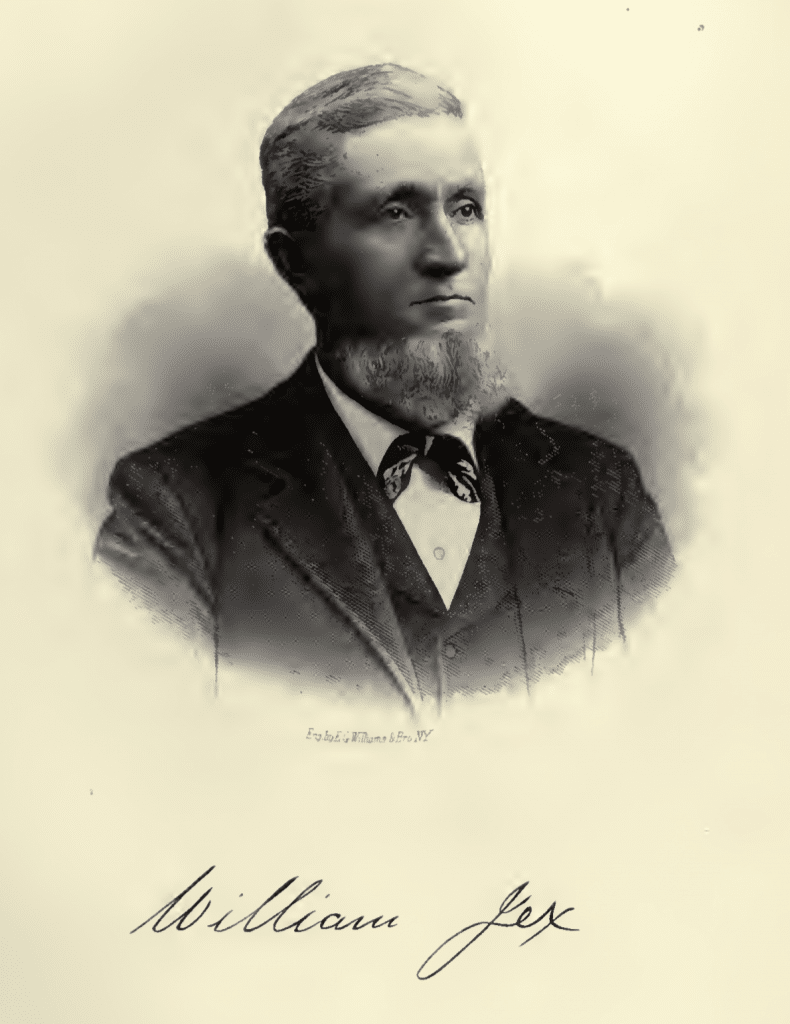 THIS worthy pair, the prolific though now aged parents of a numerous flock of children, grandchildren, and great-grandchildren, about one hundred in all, stand at the head of one of the leading families of Spanish Fork, in which town they have resided since the time of “the move,” when the inhabitants of most of the northern Utah settlements fled southward at the coming of Johnston’s army. Prior to that period they bad lived for several years in Salt Lake City. They wore originally from England, where as young people they joined the Latter-day Church, at the usual sacrifice of home and friends, and were married on ship-board, February 22, 1854, soon after embarking for America.

William Jex came from Crostwick, in Norfolk, where he was born September 5, 1831. The son of William and Ann (Ward) Jex, he was one of four children, three of whom died in England. William was but seven years old at the time of his father’s death, which event deprived him of all but two months’ schooling and forced him into service at the tender age of twelve. He worked for a wealthy farmer named Howlett, and received a shilling a week, boarding and clothing himself; but his wages were gradually increased until he was paid eight pounds a year, which was considered good wages.

He was about twenty-two when he heard the Gospel preached by the Elders, and being converted to the “Mormon” faith, was baptized March 3, 1853.

His future wife, Eliza Goodson, daughter of John and Sarah Traxon, had also become a Latter-day Saint, and was on the same ship, the sailing vessel “Windermere,” when on January 31, 1854, he went aboard, bound for New Orleans. For three weeks they lay in harbor, awaiting favorable conditions for sailing, and it was during this delay that the young couple were married, Daniel Kearns performing the ceremony that made them one. A rough passage of nine weeks and four days brought them to the mouth of the Mississippi river, from which point they proceeded as soon as possible to the outfitting post on the frontier, whence they traveled to Utah in Dr. Richardson’s ox team train, reaching Salt Lake City on the 30th of September.

A farmer from childhood, Mr. Jex found his vocation and the experience it had given him, just so much ready capital with which to begin life anew in the half desolate region which was then his home. While farming in a small way, like most of his fellow settlers, he turned his hand to any kind of honest toil that offered remuneration. He labored on the foundation of the Salt Lake Temple and upon the wall enclosing the temple square. In the fall of 1855 he was among those assigned to take Church cattle to Cache Valley, where the sole evidence of civilization in that now populous and thriving section, was one little lonely log cabin. During the grasshopper raids of early years he and his family were driven to the necessity of subsisting for weeks at a time on roots and thistles, dug from land now in the neighborhood of the Rio Grande Western railroad depot.

In the fall and winter of 1857 he was in Echo canyon as a militiaman, helping to construct earthworks to repel the invader; his family meantime dwelling in a little adobe hut, almost destitute of food and clothing. Returning from this military expedition, he followed the example of the citizens in general, and having prepared his small home for buining, if necessary, joined in the move south, proceeding to Spanish Fork, where he settled permanently.

Mr. Jex spent many years in the canyons, running sawmills, and having charge of canyon road work. He was active in defending the settlements from the encroachments of the red men, and was at the battle of Diamond creek, where he and fourteen other volunteers fought the Indians and recovered a large number of stolen cattle. In this fight a man named Edmonds was killed and scalped, and Albert Dimock mortally wounded. Mr. Jex went with Bishop A. K. Thurber, George Bean and two Indian chiefs, to Rabbit Valley in 1877, to make peace with the savages and explore the country with a view to the formation of settlements.

His civic record comprises six years as city councilman and several years as school trustee. A devout Latter-day Saint, he is now senior President of the Fifth Quorum of Seventy. His wife served for many years as President of the Ward Relief Society.

In 1880 he organized the Jex Lumber Company, which was incorporated in [illegible] and of which he is still president and manager. The annual business of this concern is about fifty thousand dollars.

Father Jex practiced the patriarchal order of marriage, marrying as a second wife Jemima Cox, by whom he had four children, all dying young. The mother also dead.

By his first wife, Eliza Goodson Jex, he is the father of eleven children, four sons and seven daughters, all exemplary and respected members of the community.  His family group, with its connections, includes four Bishops, sixteen ward officers, four stake officers, the postmaster and the mayor of Spanish Fork.

During his seventy three years of mortal life, the venerable head of the house, a man of unquestioned integrity sustained and aided by the loyal devotion of the loving wife of his youth, has done his utmost, at all times and places, for the development of the country, the rearing of righteous posterity, and the carving out of a useful and honorable career.

That success has crowned his efforts and those of his faithful companion, is abundantly manifest. They have prospered both spiritually and temporally; their sons and daughters up and bless them; and wherever known they are sincerely and deservedly esteem.

ALLPHIN, Israel Dodge
Categories: Articles, Pioneer Stories
Tagged: spanish fork ut, windermere ship
Derek Rowley
Derek is Program Director for SUP Online; formerly on the Board of the Cotton Mission Chapter, and past president of the Dixie Encampment Chapter. He and his wife, Genine, have lived in the Bloomington Ranches area of St. George, Utah, since moving there from Carson City, Nevada in 2004. Derek also hosts and produces the Hearts of the Fathers Podcast.