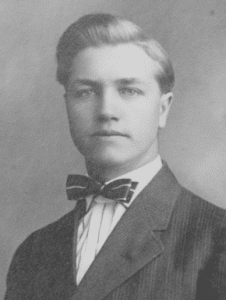 john henry jensen, 79, distinguished and devoted member of the sons of utah pioneers and prominent Provo, Utah church and civic worker, died March 1, 1971 in a Provo hospital of cancer. He was a former employee of the First National Bank of Driggs, Ida. and the Federal Land Board of Berkeley, Calif. He managed the Federal Land Bank Office and was a credit consultant in Salt Lake City.

In addition to activity in the sup, he was a member of the Lions.

Mr. Jensen’s church activities included bishop of the Driggs Ward and missionary in the Southern States Mission. He was a high priest and former superintendent in the Sunday Schools. He served for many years as a home teacher.

Funeral services were held March 5 in the Berg Mortuary Chapel, Provo, and burial was in the Provo City Cemetery.