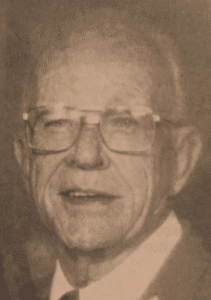 Orville Isom, 76, passed away September 19, 1990 at his residence in Hurricane, Utah. He was born May 19, 1914 in Hurricane, Utah, the son of Thomas and Annie Hinton Isom. Married Gladys Woodbury December 29, 1936 in the St. George LDS Temple. He was born and raised in Hurricane. He graduated from the University of Utah with a law degree in 1938. He served in the South Pacific during World War II in the Marines. After graduation and his military duty, he established his law practice in Cedar City, Utah and has resided there ever since. He has served as district attorney, city attorney and county attorney. He has served many small towns as city attorney, beside city attorney, county attorney. He served the residents of Iron County as legal advisor for 52 years. He was a family man. As a civic leader he was a member of the Sons of Utah Pioneers and a member of the Lions Club and supported Southern Utah State College, He was an active member of the LDS Church and served as a High Priest in the Cedar City 9th Ward. He is survived by his widow, Gladys, 7 children, 16 grandchildren and 2 sisters and 1 brother.