This article originally appeared in the Vol.58 No.2 2011 issue of Pioneer Magazine

The interior of the tabernacle, not unlike much of late 19th-century architecture but with its own unique Mormon twist, was an assortment of styles and influences, an aesthetic potpourri that suited late 19th-century sensibilities. It reflected the Mormon culture region’s growing access to and appreciation for commercial goods (such as carpets, fabrics, and trim), more refinement (such as materials that appear as hard woods: walnut, burl wood, and quarter-sawn oak), mechanization (elaborate jigsaw and lathe workings throughout), and finally the enduring appreciation for romanticism and historical association. When finished the tabernacle must have been for members of the Utah Stake a glorious demonstration of refinement and civic pride. It was not only the seating capacity that made the tabernacle for 130 years the preferred venue for community lectures, music and theatrical events and graduation ceremonies—it was also its gracious and grand design (inside and outside) that made the tabernacle a community nexus, religious and social.

Perhaps the most oft-heard criticism regarding the Provo Tabernacle design was the dissimilar appearance of the exterior and interior—the outside was predominately Gothic Revival and the interior was eclectic. Besides the late 19th-century’s penchant for mixing and matching, the lengthy time between the design (1882), the initial building (1882–1886), and completion (1898) offers a basic reason: fashions changed during the extended wait.

The gallery by master carpenter James Snyder was installed in 1884–1885 and had a decidedly Eastlake furniture appearance, with the deep and thick molding profile and the strong but simple repetitive geometric pattern of a bull’s-eye set inside a cut cornered square. The gallery’s balustrade, which like all else in the interior, was built of local pine and painted and grained to appear as hardwood burl wood and walnut, typical of 1880s American domestic furniture. The interior abounded in rich, dark, and exotic colors.

The east side of the gallery was 30 feet wider; nevertheless spectators from around the room and on all points of the gallery could see the rostrum. The heavy 1880s gallery is in contrast to light, airy and lightly painted Queen Anne railings and panels on the rostrum, built a decade or more later.

Folsom’s design illustrates a number of progressive features and ideas, and includes examples of 19th-century technology that focused on better function, public safety and comfort. 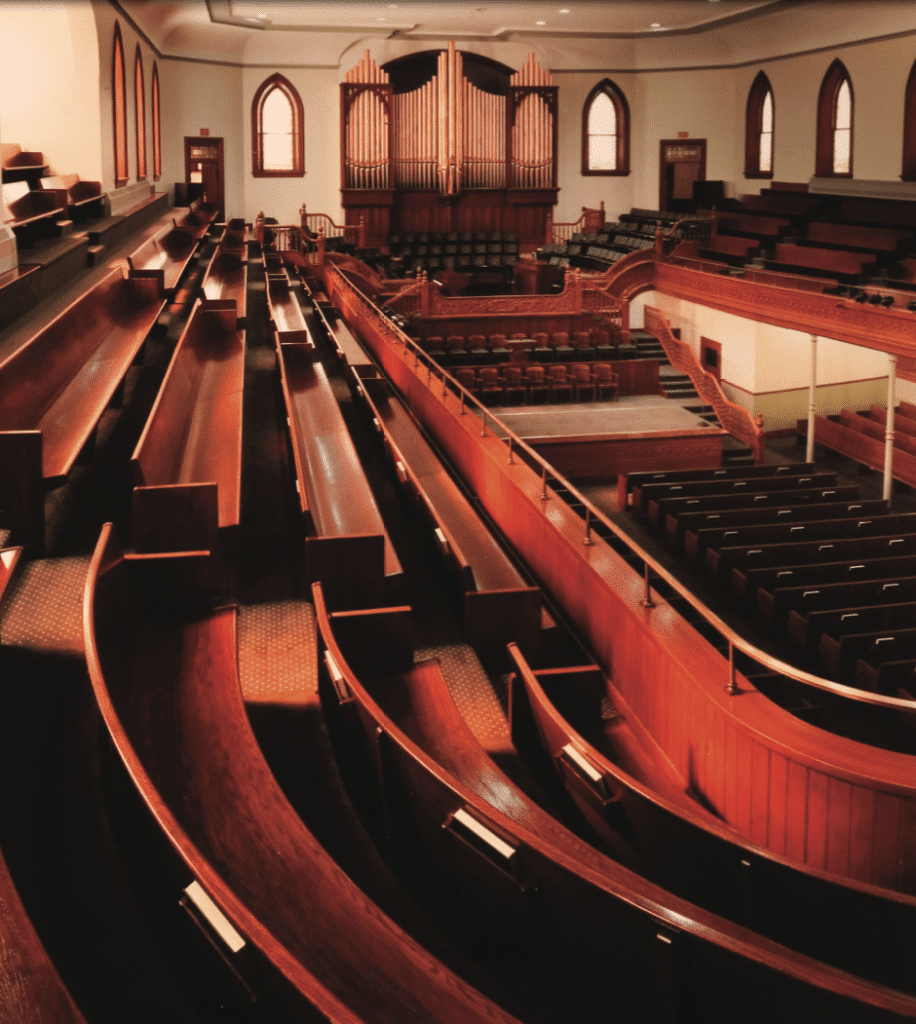 The carpenter craftsmen of the mid-1880s secured the four spiral stairs around a central post on the inside and masonry pockets on the outside; the hexagon exterior made inside a perfect circle for the perfectly proportioned Archimedes screw stairs. An expression of long-used building technology (think medieval fortress keeps) placed at each corner, the spiral staircases could quickly load and evacuate thousands of spectators. Folsom wanted egress on the two floors to happen separately but equally, with four wide doors centered at the compass points for the ground floor and four exits for the gallery, at the corners. Originally the octagon tower staircases did not provide access to the ground floor space. To go between the two floors, one had to exit the gallery to the outside then reenter the building at ground floor. Folsom reported this idea came to him in a dream. During the mid-1950s remodeling, architect and member of the Utah stake presidency, Fred Markham, cut passage ways from the towers to the main room.2

Another clever endurance/exit feature was the west entrance that allowed leaders and dignitaries to enter by a coach entrance and then slip up through a small spiral staircase to the rostrum. Also spectators could enter the west entrance and occupy seats turned at 45 degrees, flanking the rostrum, and not disturb the program. Folsom also wanted clear sight lines for as many viewer–listeners as possible; this was facilitated by a number of devices including a raised rostrum, choir seats placed at gallery level and, most importantly, a sloped floor that allowed viewing above most heads. The gallery pews were placed on large stair like tiers that offered equal viewing from the gallery. 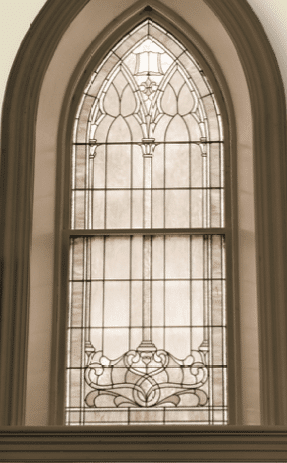 The tall, double hung, counterbalanced windows built in the mid-1880s (with finish work completed in the mid-1890s), were designed to open from both the bottom and the top, causing cross ventilation that created a breeze offering the very best in pre-mechanized air-conditioned comfort for the summer. For the winter the building’s heating and ventilation included first wood-burning stoves, then prior to the 1898 dedication, a steam heating system; portiere, or large fabric hangings, that reduce heat loss and sound distractions, were made and installed by the stake’s Relief Society women. The pre-electric lighting design offered generous windows including transoms (windows above the doors) for the tower doors, and interior windows located on the upper walls of interior rooms let indirect light in from the main hall. Also, prior to the 1898 dedication, the building was wired for electricity, and large multi-bulb electric chandeliers hung throughout the hall.

The woodwork around the Gothic windows that surrounded the hall and that of the windows in the corner towers was painted and grained darkly, likely in oak. On either side of the tower windows, panels covered the wall recesses, all in warm yellow quarter-cut oak to contrast with the warm but lighter paint on the plastered walls and ceiling. Deeply profiled paneled doors were also painted and grained to appear as quarter-cut oak.

The tabernacle benches were designed with a scooped back for more comfort, and all of them were painted and grained to appear as quarter-cut oak. Likely the benches were also installed some-time in the mid-1890s.

The grand rostrum, from the sacrament table at its base to organ pipe case at its top, dominated the west elevation. The rostrum was completed in the mid-to late-1890s at the height of Utah’s appreciation for the Queen Anne style. The elaborate network of newel posts, spindles, finals, fanned panels and handrails that divided, framed and decorated the rostrum were built with jigsaws and lathe machines and expressed the mechanized height of the Queen Anne architectural style. Likely, they were not produced in Provo or even Utah; likely they are mass-produced building components made in the Midwest or beyond, brought to Provo via the railroad. At the dedication, the rostrum benches and podiums were also lavishly upholstered. The choir seats, chorister stand and organ were placed in a semicircle form (opera seats were installed shortly after the dedication) at gallery level so voices and instrument could project. The pipe case which originally filled in only half the proscenium (the framed arch behind the choir seats) was the crowning feature for the rostrum.

The rostrum was perhaps the most distinctively Mormon component of the interior, as the multi-tiered platform and podiums referenced the three offices of the Church’s Melchizedek priesthoods. It may have also been used in other symbolic ways to express hierarchy with the priesthood and stake leadership or with the quorums of the general Church leadership. At stake conference the three bench levels seated the stake presidency and the quorum of bishops and counselors, who preside at stake conference, seated on the stand facing their congregants.
This tour-de-force rostrum was slowly, over the years, reduced in its finery, including the multiple podiums, to accommodate a frequently installed platform stage. However, the symbolic appreciation and use of the multi-level podiums also faded away in the 20th century.

The final grand interior feature was carpenter and wood carver Thomas Allman’s decorative panel, located, centered, on the back panel of the rostrum, in a primitive symmetrical florid pattern, which speaks to the abundant creativity, craftsmanship and devotions offered in building Utah County’s most beautiful 19th- century landmark.