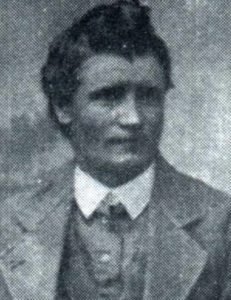 At the age of eight, with his entire family (father, James Mellor Sr.(37), mother, Mary Ann Payne (36); sister, Louise (15); sister, Elizabeth (14); sister, Mary Ann (10); brother, William C. (5); and the twins, Emma N. And Clara A. (3), James Mellor Jr. sailed from Liverpool, England on the ship “Horizon” in 1856. Just before they left for America, Mary Ann Payne gave birth to twins, Elizabeth and Eliza Mellor, who died after birth. Although the mother was so sick that she was told she would die on the boat, she was blessed by the Elders who told her that she would live to see Zion. They landed in Boston Harbor June 2,1856, traveled to Iowa City, Iowa which they left on Jul 28,1856. They left Florence, Nebraska (Winter Quarters) with the martin handcart company, on Aug 25,1856 with 576 people (See the book Charlotte Elizabeth by Jo Ann Mellor Felix for more details). Arrived in the Salt Lake valley Nov 30,1856 after suffering severe hardships.

Not one member of his family died on that fateful journey; but one of the 3 year old twin girls never had her shoe size get larger than size 3 because of frostbite of her feet from the trip.

While with the Martin Handcart Company, Mary Ann Payne, James Mellor Senior’s wife decided to lighten their load by selling some of her children’s clothes in Iowa which was two miles away. She knew that the company would go on without her; but, she felt that she could catch up quickly because she would be traveling light. She left early in the morning with her oldest daughter, Louisa (age 16). When they reached the town they found that no one in town wanted to buy the clothes; so, they decided to go door to door. By the time they had sold the clothes, it was noon-time.

They left quickly and attempted to catch up with the company. Mary, however, was so hungry and faint that she finally told Louisa to go on without her. Louisa would have none of that. She instead walked ahead a short distance, kneeled down, and poured out her heart to the Lord to help them. She arose and headed back toward her mother on the same path she had just taken. She walked a short distance when she suddenly saw something in the prairie grass. It was a freshly baked pie! It was laying right side up, and the crust wasn’t even broken. They both thanked the Lord for the immediate answer to her prayer, ate the pie, and resumed their tip toward the company. In the meantime, since they had not caught up with the company in the time expected, James Sr. had taken his handcart to go look for them. He found them and took them in the handcart back to camp. The company eventually got stranded and rescue parties were sent to help them.

Louisa (the 16-year old) also had another experience in which her hair became frozen to the ground at night, and the company had to use an axe to cut her free. They had no better tools to use.