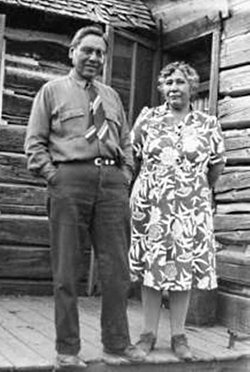 moroni timbimboo, a Shoshoni Indian living in Northern Utah, had an experience in 1916 that made him believe God had a mission for him in life. Running to catch a moving train, he lost his grip on the hand rail but his foot was caught in the step and he was being dragged along the ground. He prayed for help and found a strength greater than his own in raising himself up to the hand rail.

He was the third generation of his family to be a member of the Mormon Church. After the accident he decided to dedicate his life to service in the church, where he had been a Sunday School superintendent at 16.

He made his living farming and served as a counselor to two bishops for 20 years. Then in January 1939, Timbimboo became Indian Bishop of the Mormon Church, serving the all-Indian washaki ward.

Now retired, Mr. and Mrs. Timbimboo recently celebrated their 60th wedding anniversary, Timbimboo says his wife encouraged him, for her motto was “Always obey a calling in the church.” For the Timbimboos “Service is a way of life.”

PLYMOUTH — Moroni Timbimboo, first Indian bishop named by the LDS Church, died Friday at the McKay Hospital in Ogden of causes incident to age. He was 86.

Mr. Timbimboo was a farmer in Washakie where he presided as LDS bishop during the years of World War II. ,

He was reared and educated in Washakie and Malad, Idaho. He had lived in Clearfield for 17 years and moved to Plymouth 6 years ago.

He filled a North Central States LDS Mission. He was a high priest in the Belmont Ward and had served as bishop’s counselor for 26 years and bishop for seven years. Sunday School superintendent, ward clerk and as a member of the Malad Idaho Stake Genealogical Committee, all while living in Washakie.

He had worked at the Defense Depot in Ogden and at Hill Air Force Base. He owned and operated a farm near Washakie.