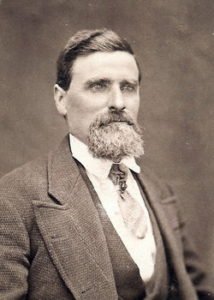 Philip Hurst wrote the following to the “Salt Lake Herald” concerning Indian affairs in Sanpete County.  It was published on 1  January 1873.

Occasionally I read accounts of Indian Affairs some of which express a doubt whether there has been any trouble here with Indians or not.  From our chief magistrate in his message (he) uses the words “real or imaginary” in speaking of Indian troubles in this region.  If my evidence is of any value, I should like to tell a few facts connected with the history of this settlement since the spring of 1865.

The Indians then opened the ball by killing jens larsen, our shepherd.  The next morning they killed the Givan Family of six persons, and then drove off a large herd of cattle and horses belonging to this place and Mt. Pleasant.  During the same summer they killed david jones.  To protect ourselves and stock, we hired eight men to act as scouts, and four men to herd cattle.

In the spring of l866 the Indians killed thomas jones and wounded william avery.  It was thought best for our settlement to move our women and children to Mount Pleasant; and while they were there, we built a stone fort here.  We then moved our families back, and fed our cattle in the corrals from the first of August until the Spring of l867.  We then hired 10 mounted men to herd our cattle and protect the settlement.

In the spring and summer of l868 the Indians stole a number of work horses and mules.  Two men went in pursuit.  In a few days they returned, bringing part of the stock back, reporting they overtook the Indians going up a steep mountain, and that the thieves fled, taking the swiftest horses with them.

In the fall of 1869 the Indians stole a small band of horses from a field, close to town.  The same summer they took a span of horses from a party that were out service-berry picking.  In l870 the Indians shot at two men and then drove off a band of colts before the citizens could rally after the report was given.   In l871 we had no trouble with Indians, except to satisfy their begging propensities.

In the spring of l872 the Indians came in large numbers.  They were arrogant and domineering, but we got along with them the best we could.  Indian agent Dodge told them to go back to their reservation, and for us not to feed them anymore.  This made them mad, and many of them were determined to kill whites and steal horses.  Just in the heat of haying, they killed Nathan Stewart, wounding Peter Larsen, and Martin, the boy, while fetching the cow herd home.  After this we hired six mounted men to herd the cows, and broke up the Cooperative stock herd in Thistle Valley.

General Morrow and troops came to our assistance and furnished us protection while we were harvesting our crops.  They were warmly welcomed by the people; who now thought that Uncle Sam would hold a protecting hand over his nephews in Sanpete, but the white tents were struck, and the troops were marched back.  Why, we could not learn, as the Indians were stealing whenever they could get a chance.

If government wants to know if there has been any Indian trouble here, let men be sent here to inquire; talk to the widows of Jens Larsen and David Jones, the widowed mothers of Thomas Jones and Nathan Stewart; visit the graves of the entire Given family; talk to the men who have rode night and day for hundreds of miles, trying to bring these marauders to Justice; ask the amount of taxes paid for protection; and see the men who have had their only team taken more than once.  And this is only one settlement’s story.

Other settlements could tell a similar tale; differing in detail; and when I read expressions from high officials which seem to doubt our troubles, I ask myself, am I awake or is the last eight years experience the imagination of a fevered brain?