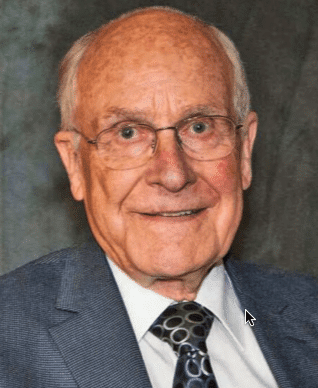 On May 3, 2020, our dear friend and former National President James Hurst died. His obituary was published on May 7, 2020 in the Deseret News.

Jim, as he was fondly known, will be greatly missed by his family and friends. During his tenure on the Executive Committee he gave great council to the Pioneer Magazine Committee. I will always be grateful for his contributions which had a positive effect on the direction and content of the magazine. He made suggestions as to topics which would be meaningful and suggested individuals who would be willing to author the subjects. His positive nature was always uplifting and valuable. If there was a problem, he was always a part of the solution. His years in education and in administration were evident as he carried out his assignments, both in the Church and the sons of utah pioneers.

All of his service in his profession and society could not have happened with out the love of his wife, Joan. She has been at his side in all that he has done.

Jim was a true friend. I am reminded of The Spoken Word, The Secret of True Friendship, when I think of Jim:

What does it mean to have a genuine friend? We may have many acquaintances, and we can be friendly to all of them, but true friendship is more than that. It requires more from us, and it gives us more in return.

A Greek legend tells of two young men, Damon and Pythias, who exemplified true friendship. Pythias was unjustly accused of plotting against the king and was  sentenced to die. He pleaded for a few days’ freedom so he could arrange care for his family across the sea,  promising to return before the day of his execution.

Suspicious that Pythias was merely trying to escape  his punishment, the king said he would allow Pythias  to go only if he provided a substitute, someone who  would be put to death if Pythias didn’t return in time.

Damon agreed to stand in his friend’s place. Sure enough, days went by and Pythias didn’t come  back. The day of the execution arrived, and Damon was  marched to the palace.

Just then, a man was seen racing  desperately through the crowd. It was Pythias, who  fell into the embrace of his beloved friend. Exhausted,  he explained that pirates had captured his ship and  thrown him overboard. Terrified that this would mean  Damon would die in his place, Pythias swam to shore and arrived just in time.

The king was so astonished by this amazing display  of devotion that he freed them both — and begged to be the third member of that friendship.

In the Gospel of John, we read, “Greater love hath  no man than this, that a man lay down his life for his  friends” (John 15:13). Friendships like that don’t just  happen. They are carefully built over a lifetime — as  we sacrifice our own interests, as we offer love with no  strings attached, as we reach out during the hard times,  as we remain loyal when it seems the rest of the world  has turned away.

I found Jim to be that kind of friend

Our favorite former US Army Ranger, University administrator and educator, mentor to all, beloved husband, father and “Pop” passed on Sunday evening, May 3 in the loving care of his family and in the home he loved so well in Mountain Green, Utah following a two year valiant struggle with idiopathic pulmonary fibrosis.

Jim was born at home in Ogden, Utah to Leo Calvin and Deseret Ione Salt Hurst, and spent his first 18 years growing up with three older siblings and many cousins at 450 Darling Street. He attended Lewis Elementary and Junior High and graduated with the Ogden High Class of 1953 serving as student body president. The country was at war in Korea when Jim graduated and following family tradition of military service he volunteered for the draft. Prior to boarding the train for Ft. Ord his father embraced him and whispered in his ear, “Son, give ’em the best you’ve got!” Sincere efforts to follow his father’s advice resulted in advanced training in a Leaders Course following basic training and the assignment to Ft. Benning, Georgia for Special Forces training as a U.S. Army Ranger, the most demanding and rigorous experience of his life. A 13-month deployment to Korea where he served as a Platoon Leader tasked with establishing security at the DMZ completed his two-year obligation. He was discharged with the rank of Sergeant.

Jim and Joan (Rees) were true “high school sweethearts” which began one summer at Camp Lomondi where his parents were camp directors. This relationship grew and survived through high school into his 2-year army tour. On Christmas Eve 1955 Jim asked Joan to marry him, gave her an engagement ring – and left 10 days later for his LDS mission to California. He was to affirm repeatedly in the coming years that asking Joan to marry him was the single best decision of his life. They were married in the Salt Lake Temple on May 16, 1958.

Jim’s journey in higher education began at Weber College, where he was elected president of the Associated Students, graduating in 1959 and transferring to the University of Utah where he graduated in 1961 with a B.S. in Psychology. Jim was awarded a graduate assistantship at BYU to study counseling psychology and following his first year of graduate work was awarded a three-year National Defense Education Act Fellowship leading to his Ph.D. He selected Duke University in Durham, North Carolina for the required psychology internship to complete the doctorate. The cross-country trip to Duke involved loading four children, Kathy 6, Jeff 4, Brad 2, and belongings into a VW bus and driving 5 days to their destination. Jennifer, the youngest, was just 2 weeks old.

From the very first, The Church of Jesus Christ of Latter-day Saints played a major role in the identity of the Hurst family. Belief systems were formed and values were shaped through life at home and interactions with the Church. Jim was called to serve as a bishop’s counselor, as a bishop twice, on several high councils, as a counselor in a stake presidency and as a stake president in addition to many teaching and leadership positions. Together, Jim and Joan served two senior missions, one in South America and one in Europe, both as Area Mental Health Advisors. These mission assignments had them applying Jim’s training as a psychologist to help struggling missionaries overcome personal problems and succeed as missionaries. In their callings they traveled extensively in South America and in Europe.

Throughout his life Jim found himself placed in positions of opportunity and leadership. In addition to his school and college student leadership roles and his leadership callings in his Church, he was elected as National President of the Counseling Psychology Association, Chair of Clinical and Counseling institutional accreditation for the American Psychological Association, and National President of the Sons of Utah Pioneers. He also received a Lifetime Achievement Award from Weber State University. He enjoyed classroom teaching. Even as a vice president he insisted on teaching a freshmen class every fall and a graduate seminar every spring semester. Jim loved the campus environment and being a part of it.

Family was the “highest good” for Jim and Joan in providing adventurous and loving memories that will be precious in the eternities. Times with grandchildren sleigh riding, singing with his ukulele, telling stories, and just laughing together were delicious. The sacred title of “Pop” will always have a special meaning for us all. Being able to have those relationships in the eternities is a major part of the testimony of Jesus Christ as our Lord and Savior that drove Jim’s behavior each and every day of his life. He will be greatly missed!