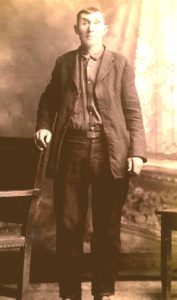 thomas martin hull was born 17 March 1867 in Franklin, Utah Territory to Thomas Hull and Jane Price Roberts.  He was the oldest son born to this couple and he had 4 sisters and 3 brothers.  His brother, William Edward was killed by Indians near the town of Blackfoot, Idaho on 13 April 1891 at the age of 19 years and 11 months.  His brother, James Simon only lived 8 years and he died in 1882.

The Hull’s from Ireland had been quarrymen and so they were called to help build the Salt Lake Temple and the logan temple.  This quarry work would be a blessing to Thomas and Helene when they settled in Shelley, Bingham, Idaho. Thomas Martin was born in 1867 in Franklin, his sister, Mary Jane was born 8 May 1869 in Franklin also.  They must have moved to Hooper sometime in the late 1870’s or early 1871 because his brother William Edward was born 15 May 1871 in Hooper.  All other siblings were born in Hooper.

As I contemplated this move from Franklin to Hooper I came to realize after waking from my sleep and being prompted by the spirit, one of the reasons they made this move was because of the Indian problems in and around Franklin.  The Bear River Massacre occurred on 29 January 1863 and this historic site is only 12 miles west of the little town of Franklin, Idaho

In the 1880 US census, Thomas and his parents and his brothers and sisters are living in Hooper, Weber, Utah.  They had moved here from Franklin.  At this time, Thomas is 14 years old.

Helene Frederikke Rasmussen was born on 26 December 1869 in the town of Sundby, Aalborg, Denmark.  She emigrated to the US in the year 1873 when she was 4 years old.  According to her father’s biography, on June 24, 1873, they left the little town of Hjallerup, Denmark enroute to Utah.  They had a safe voyage and a pleasant journey through the states and arrived in Ogden, Utah July 24, 1873. A few days later they reached Weston, Idaho.  Weston was a small, newly settled town and the people were very poor. According to the 1880 US Census Record for Trenton, Cache, Utah, Helene was 9 years old.

Why the move to Shelley?? Well Thomas lost his mother, Jane Price Roberts, on 7 November 1883 and his father remarries on 12 February 1886 to Mary Ann Fluitt.  They are all living in Hooper at the time and helping one another on the farm.  Thomas’s sister, Elizabeth Ann Hull (my grandmother), is married and is living in Shelley with her husband (John Henry Mitchell) and has taken up a homestead northeast of Shelley.  So with the possibility of owning his own ground, Thomas and Helene move to Shelley, Idaho sometime in 1891/1892 because their daughter Alta Jane is born in August of 1892.

According to the Homestead papers (160 acres) filed by Thomas Hull on 25 February 1905, they have settled northeast of the little town of Shelley, Idaho.  It is here that Thomas quarrys red rock from the  town site of Menan, Idaho and builds a beautiful rock home for the family.

Thomas and Helene are working hard to prove up the homestead when she catches pneumonia and dies on 31 July 1910 in Idaho Falls, Idaho leaving her husband Thomas with 4 children to care for and a homestead to prove.

In the 1920 US Census Record for Thomas, Bingham, Idaho,  Nina is 22 years old and she has married Michael F. Korherr and her sister, Alice F. is 14 years old and living with this family. Edward LeRoy is not with the family at this time.  He would be 21 years old and is on his own.

In 1914 Alta Jane dies and her husband, Michael Korherr, marries her sister Nina Louise on 24 March 1917.  The other sister, Alice Florence has gotten married in 1925 to Wayne Mills.

Thomas’s little brother, Owen Martin was married on 12 September 1905 so he is out of the house before Helene dies. Thomas’s grandmother, Mary Martin, who was living with this family has also died in 1904. I was unable to find Thomas Martin Hull in a 1920 Census Record, but I do find him and his second wife, Francetta (nickname of Etta) Curtis Peppers, who he marries on 18 January 1912 in Blackfoot, Bingham, Idaho.  According to #510 Deed Record dated 4 Jun 1917 Thomas and Etta are still together.  By 1927 he is married to Helen M. Muller and is living in Thomas, Bingham, Idaho.  Another Deed Record dated 20 July 1948 only shows Thomas (no wife listed).

Francetta died on 26 February 1946 in Salem, Utah. They must have  divorced because I then find Thomas married in the 1930 US Census and living in Thomas, Bingham, Idaho to one Helen M. Hull age 53 and a step-son, age 25.  Thomas is 63 years old at this census.  Thomas and Helen were married in Salmon, Lemhi, Idaho on 26 Jul 1927.

I remember my Uncle Tommy as we called him when I was a young child.  He lived by us down on our farm northeast of Shelley.  He was alone then and I always liked him.  He did not have much but I can always remember him with his hat on,  a pipe in his mouth and his dog.

It is my assumption that he must have lost his farm in Shelley after Helene dies because he can no longer improve upon the homestead he has settled on.

Thomas Martin Hull, his wife, Helena, and their children, Alta Jane, Edgar, Evelyn, and Avengeline are all buried in the Shelley, Idaho Hillcrest Cemetery along with Thomas’s grandfather and grandmother, Owen and Mary Martin Roberts.  They await the morning of the first resurrection.

From what I have been able to glean from records he did did not have an easy life.  He worked hard and he had nothing of worldly treasures.  He was my grandmother’s brother and he was a part of my life for 20 years.

He lost his wife and 5 children.  My heart breaks just thinking of how hard it was for him to survive and go on with life and try to do the best he could.

I hope this history will touch your heart like it has mine and I will ever be indebted to him for his strength and character and I hope I was able to do him, Helene and his family the respect and honor they deserve by writing this history.  I love you Uncle Tommy.