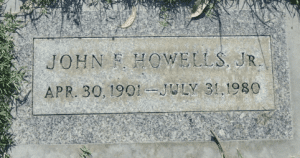 John Francis Howells, Jr., 79, died July 30, 1980 in Indio, Calif. He was an active member and past president of the los angeles chapter of the Sons of the Utah pioneers.

Retired general agent, Metropolitan Life Insurance, Co. Former captain and halfback on the University of Utah football team. One of the first U. of U. players to be named all-American. Member of the sup Centennial Trekkers in 1947.

Funeral was held in Indio, Calif.