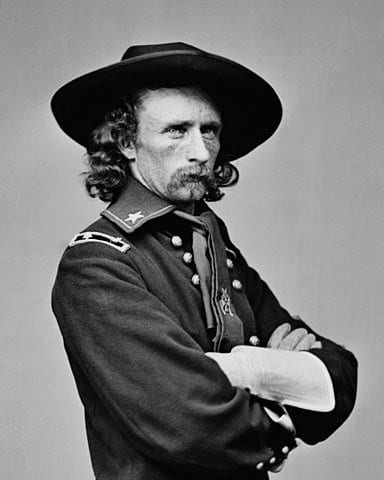 On June 25, 1876, general george custer and his men attacked a Sioux Indian camp in the American Northwest. During the ensuing fight, which would come to be known as the Battle of the Little Bighorn, Custer and his men were massacred. Although United States troops had been fighting Indians in the Northwest for years before Custer’s attack, this was to be the battle that would be best remembered of all those in the Indian wars.

How did people living in the 38 states of the United States hear of the attack? How fast was news of the disaster relayed to them? How was the legend of General George Custer born?

News of the massacre was slow in spreading because all United States troops in the attack were killed. No survivors were found to tell what happened. It was days before government officials and newspapermen received their first word of the battle. On July 3, the Washington Evening Star reported that Army officials at Little Bighorn were concerned because a regiment had not been heard from. New Orleans’ Daily Picayune published the same story July 4.

Most Americans probably thought little about the report. They had their minds on something else—the 100th anniversary of the signing of the Declaration of Independence. Large and small celebrations were being held across the country in commemoration of the historic event, which the nation had looked forward to for years. It’s no wonder, then, that newspapers published immediately before and after July 4 were dominated by news of the celebrations.

Newspaper writers for the Helena Herald and the Salt Lake Tribune sent out the first dispatches on the Custer disaster via telegraph. Both correspondents obtained their information from Muggins Taylor, a scout for General Gibbon. When the first word of the disaster came through, many newspapers buried the news inside because the first few pages were devoted to Independence Day celebrations and advertising. The San Francisco Chronicle published this account on page 3 of its July 6, 1876 edition under a one column headline:

The Gallant Custer Killed Five Companies of Regulars Exterminated
Little Column Annihilated
A Brave Charge from which not a Man Returned.
Indians Subsequently Put to Flight.
(Special Dispatches to Chronicle)

SALT LAKE, July 5 — The special correspondent of the Helena (Montana) Herald writes:
STILLWATER (Mont.), July 2 — Muggins Taylor, scout for General Gibbons, got here last night, directly from Little Horn River. General Custer found the Indian camp of about 2000 lodges on Little Horn and immediately attacked the camp. Custer took five companies and charged the thickest portion of the camp. Nothing is known of the operation of the detachment, only as they are TRACED BY THE DEAD.

Major Reno commanded the other seven companies, and attacked the lower portion of the camp. The Indians poured in a murderous fire from all directions. The greater portion fought on horseback. Custer, his two brothers, nephew and brother-in-law were all killed, and not one of his detachment escaped. Two hundred and seven men were buried in one place, and the number of KILLED ESTIMATED AT 300 with only 31 wounded. The Indians surrounded Reno’s command and held them for one day in the hills, cut off from water, until Gibbons’ command came in sight, when they broke in the night and left. The Seventh fought like tigers and were overcome by mere brute force. The Indian loss cannot be estimated, as they bore off and cached most of their killed. The remnant of the Seventh Cavalry and Gibbons’ command are returning to the mouth of Little Horn, where a steamboat lies.
***

The writing style was a far cry from today’s modified summary lede that is designed to reveal the most important facts first. The reader of 1876 learned that Custer found the Indian camp and attacked it, and then he was told that “nothing is known of the operations of this detachment only as they trace it by the dead.” Finally it was disclosed that Custer, his relatives and his men were killed. At one point, the Salt Lake City reporter added a bit of interpretation: “The situation now looks serious.”

Editors realized that the story made fascinating reading and that it represented a disaster of major proportions. The Chronicle commented on the battle in an editorial July 6 headlined “Slaughter Custer and His Command.” It called the news “a blood-curdling tale of horror. The news of the death of Custer and the utter annihilation of his little band of heroes he led against the Sioux will be read throughout the country with the painful interest and the thrilling emotion inspired by the most awful tragedies of history. It matters little now where the responsibility for the commencement of hostilities rests, the result must inevitably be the destruction of the Sioux.”

A Poke At Grant

The Atlanta Constitution, a staunchly Democratic newspaper, could not resist the opportunity to poke fun at President Grant’s Republican administration, particularly since it was an election year. In a column of editorial notes on the left side of page one, the Constitution commented, “When Grant ordered General Custer to the West in order to get the general out of the way of the investigating committees of Congress, he little imagined how successfully he was about to dispose of Custer. The dead general was a brave and able officer, and his death will be greatly regretted.”

The next day the Constitution elaborated on its views in an editorial: “The Indian war which has been brooding there (in the West) for years, has at length found bloody inauguration. He (the Indian) resists and will fight to the end against further wrongs. The government will quiet him, possibly extinguish him, and all will soon be lost in tradition that now lends him a sublimity of character which does not belong to him in a state of nature.”

The newspapers’ initial inclination to treat Custer as a hero was kept in check as details of circumstances surrounding the battle became known. Army officials said Custer disobeyed orders. The San Francisco Chronicle commented on July 9: “We think that it appears too clearly from these dispatches that Custer fell a victim to his own rashness and his ambition to gather for himself and his special command the laurels of the campaign.”

The newspapers of the country had fun with the Custer story. They realized it was tremendously interesting to the reading public. They also demonstrated that they could make or break heroes, as they first enhanced Custer’s reputation and then chipped away at it.