This article originally appeared in the Jan/Feb 1972 issue of Pioneer Magazine. 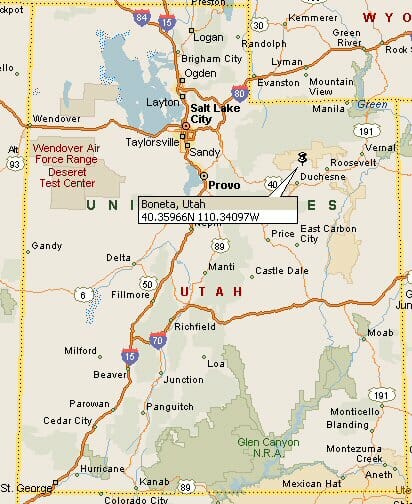 boniet bend is located in the lower course of the Green River where two bends come together, the old bend having been abandoned by the river, leaving a great circular rock.

Castilla Springs are found in Spanish Fork Canyon and were thus named by the Spanish traders from Mexico, traveling the old Spanish Trail into Utah Valley. These springs were named for the Spanish Province of Castile, from which pure Spanish Flows.

castle gates. By extension, the name has been applied to a coal mine, railroad station and town near the Castle Gate. Castle Rock is located in Summit County and is a railroad station in Echo Canyon, named from a gigantic rock which is suggestive of a ruined castle.

Cataract Canyon of the Colorado River heads at the confluence with the Green. This was so named by Major Powell in 1869 on his expedition down the Green-Colorado, because he felt the water descends with such velocity and continuity that he thought the term “rapid” failed to interpret the conditions.

Kanarraville, in Iron County, is at the base of Kolob Terrace. The word Kanarra derives from the name of a Paiute headman, Quanarrah, whose permanent camp was worsted by the Mormon village. The suffix ville denotes village; the name Kanarraville coming from two different languages.

Red Canyon is the Green River channel after it is deflected due eastward by the Uintas. Major Powell named it from the color of its walls. He named the rapids in Red Canyon Ashley Falls for General W. H. Ashley. Flaming Gorge Dam is in Red Canyon.

Rich County embraces the northeast corner of Utah. The southern half of Bear Lake is in Rich, the northern half in Idaho. Rich County was organized in 1864 and named for Charles C. Rich, an early Mormon apostle, who was prominent in the settlement of the Bear Lake Region.