Great Basin is the name first applied by Captain John C. Fremont to the area extending from the Wasatch Mountains on the east to the Sierra Nevada on the west; a region characterized by inland drainage aridity of climate and comparatively scanty flora and fauna.  Fremont chose the adjective “great” to describe the extent, one sixth of the area of the United States, and topographical importance of the great basin. Sovereignty of the Great Basin, together with the remainder of Nauevo Mexico and Alta California passed from Mexico to the United States, February 2, 1848.

Ibapah, (Tooele County), in Deep Creek Valley north of Goshute Reservation, was an Indian village site, later a ranch hamlet. Ai-bim-pa is the original Goshute form of the word; Chamberlin gives this etymology: ai-bi for “clay,” an adjectival ending, and pa wor “water.” The water there is tinged with clay silt. His informant thus explained the origin of the aboriginal name. Ibapah is the Americanized version.

Jensen (Uintah County) is a village at the west end of the Green River crossing of Highway 40. A five-mile, terminal road leads northward from Jensen to the museum and quarry in Dinosaur National Monument. This crossing was named for Lars Jensen who settled here in 1877 and started a ferry service across the Green in 1885.

King’s Peak (in Duchesne County), 13,498 feet, is the highest point in Utah: it is on the crest of the central High Uintas. King’s Peak was named for Clarence King, geologist, one of the original members and first head of the United States Geological Survey in 1879. 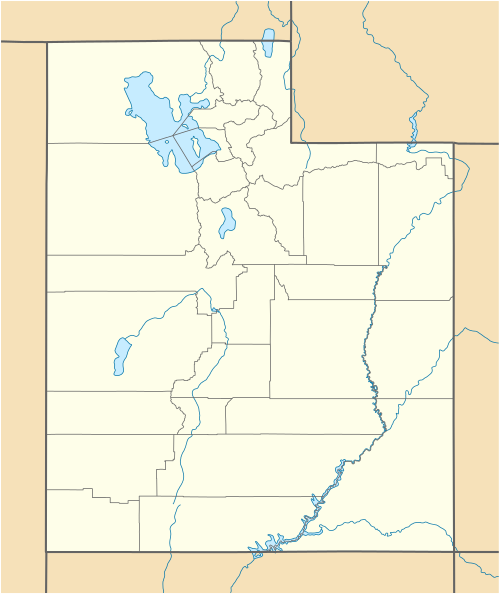 Little Salt Lake (Iron County), is a thin, brakish sheet in the sink of Parowan Valley. Red Creek and Center Creek drain into it. Parowan Lake is the colloquial name. little salt lake was named in contrast to Great Salt Lake in early exploratory times. The informant, Wootz Parashontz, gave the Pah Ute name as Paragoon, which implies “vile water;” and this word is the root of the name of the village to its southeast, Paragoonah. Also, the name Parowan has evolved from Paragoons, “marsh people,” the name of the Pi-Ede band living near the Paragoon.

Mount Nebo (Juab County), 11,928 feet, is the dominating block of the Wasatch Range in central Utah. The Wasatch Mountains, as a single chain, terminate with this headland. This conspicuous mountain in the Utah landscape was named by Mormon pioneers from the highest mountain in the Biblical scene east of the Jordon in Moab — mount nebo