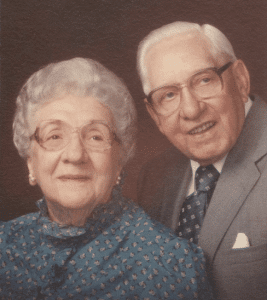 david crawford houston, past president. Sons of Utah Pioneers, director of Communications, Utah Copper Division of Kennecott Copper Corporation, is a native Utahn, born in Panguitch in 1901. He received early schooling in Southern Utah. He graduated from Brigham Young University in 1927 with a B. S. degree in business administration.

He received the degree of master of business administration at Leland Stanford University in June 1929. He has served the state governments of California and Utah and the United States government in various capacities, and has been associated with the mining industry of Utah since January 1940.

Mr. Houston first started with Utah Copper Company, a division of Kennecott, Utah Copper Company, a division of Kennecott ,as assistant superintendent of welfare in 1940. In 1943, he was appointed to the position of superintendent of welfare. He became director of industrial relations for the Utah Copper Division in 1945 and served in that capacity until May 1957, when he was advanced to the office of director of communications.

Not only is he closely identified with mining in Utah, but has had wide experience in business, church and civic activities in many other states and Canadian provinces.

He resided at 2382 Becon Drive, Salt Lake City. His wife was the former Julia Ellen Loveless of Orem, Utah. They have three children.

Released as president of the California South Mission on August 1, 1969. He served as LDS Personnel Department overseas representative. At the conclusion of that assignment established his own management consulting service as one of the organizers of “Management Seminars, Inc.”

“David Crawford Houston, Sr. passed away September 10, 2000 in Bountiful, Utah. He was born April 13, 1901 to James Houston and Sarah LeFevre in Panguitch, Utah. Crawford attended public school in Panguitch and two years at Dixie College before serving a mission in the Northwestern States Mission where he met Julia Loveless. Crawford and Julia were married June 9, 1926 in the Salt Lake Temple.

He received his B.S. Degree from Brigham Young University and an M.B.A. from the Graduate School of Business, Leland Stanford University, Calif. Crawford led a life of service dedicated to his family, his church, and the community. He enjoyed working with people and working in his garden at his home in Salt Lake City.

He was an active member of the Church of Jesus Christ of Latter Day Saints where he served as an Aaronic Priesthood quorum advisor, Sunday School teacher, Sunday School Superintendent, Elders Quorum President, Stake High Councilman, 1st Counselor in the Stake Young Men’s Presidency, Host on Temple Square, and as President of the California South Mission from 1967 to 1970. Crawford later served for 17 years as a Sealer in the Salt Lake Temple.

Crawford worked for the California State Department of Agriculture in Washington D.C., the U.S. Department of Agriculture in Salt Lake City, the Utah State Planning Office, and served as Director of the State Public Health Education Program. However, most of his professional career was spent with the Utah Division of Kennecott Copper Corporation where he spent 26 years as Industrial Relations Director and Communications Director.

Crawford served as president of the National Society for the Study of Communications and the National Organization of the Sons of the Utah Pioneers. He was a member of the Salt Lake Chamber of Commerce and served as chairman of the Public Relations Committee for the Great Salt Lake Council of the Boy Scouts of America. He is survived by his daughter Betty Jean (Fred) Sim of Bountiful, eight grandchildren, 19 great-grandchildren, and three great great-grandchildren. He is preceded in death by his wife, his daughter Karma Houston, and his son David C. Houston, Jr.

The family would like to thank the members of the staff at Life Care Center and Heritage Place, both in Bountiful, for the wonderful care they provided to Crawford during his stay in their facilities. Funeral services will be held Saturday, September 16, 2000 at 12 noon at the Monument Park 9th Ward, 1565 South Foothill Drive. Friends may call Friday evening from 6-8 p.m. at Larkin Sunset Lawn, 2350 East 1300 South and Saturday at the ward from 10:45-11:45 a.m. prior to services. Interment, Wasatch Lawn Memorial Park.”