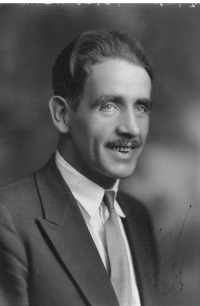 Hugh Holdaway, 83, member of the salt lake city chapter of sup, died March 2 of natural of causes in the Salt Lake Temple where he had gone to perform ordinance work.

On September 25, 1969, Mr. Holdaway and his wife Pearl celebrated their 60th wedding anniversary with their five sons and three daughters, 35 grandchildren and 44 great grandchildren in attendance. They became engaged while both were attending Brigham Young University.

At byu, Hugh was an outstanding athlete particularly in track and field sports, excelling as a mile runner in which he set a number of records. Following his athletic career he taught in high school and coached. He was active in scouting for more than 20 years.

Professionally, Hugh was a rock mason. Much of his artistic work is seen on Utah churches and public buildings. Mr. Holdaway put his artistry to work in the later years of his life when he constructed a stone-masonry love cottage for his lady Pearl at 315 Vincent Court in Salt Lake City. Pearl painted a 16-foot mural for the bedroom.

Mr. and Mrs. Holdaway were married Sept. 15, 1909 in the Salt Lake Temple. The observance of their 60th wedding anniversary was strictly family, the youngsters entertaining the oldsters with music, speech, drama and skits by members of each branch of the family tree.

The Holdaways have traveled extensively on the continent, visiting most of the parks and places of interest and have done work in all the Mormon temples. Hugh spent three days a week as an ordinance worker in the Salt Lake Temple, when he died of a heart attack while preparing for his assigned session.

He was an enthusiastic member of the Radio Night Caps and lived up to its creed before it was even written.

Active in church work throughout his life, Mr. Holdaway held the office of high priest and gave considerable of his time and attention to the Sons of the Utah pioneers.

Funeral services were held Mar. 4 and burial was in the Provo City Cemetery.