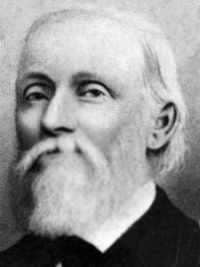 Submitted by Will Allphin, Chapter member.  This information came from:  The Hatch Genealogical Society, Prominent Men of Utah, Family histories.

meltiar hatch was born in Farmerville, New York, July 15, 1825, a son of Ira Stearns Hatch and Wealtha Bradford.  He became a member of The Church of Jesus Christ of Latter-day Saints June 10, 1842, and was ordained an elder by President Brigham Young about 1852.  later he was ordained a high priest.  His baptism took place at Job’s Creek, Hancock, Illinois, where a branch of the Church had been organized.  His family had moved to this place in 1842.  The following year, 1843, an epidemic of fever broke out.  Many saints died; among them was his mother, Wealtha Bradford Hatch.  This brought deep grief to the family.

Meltiar served as a lieutenant in the Nauvoo Legion and was intimately acquainted with the Prophet Joseph Smith.  Meltiar heard the Prophet deliver his last speech before going to Carthage Jail.  During these trying times Meltiar carried messages to and from Carthage Jail while the Prophet and his brethren were confined there.  He attended the funeral of the martyrs and was present at the notable gathering in Nauvoo when Brigham Young was acknowledged to be the right man to stand at the head of the Church.

On January 1, 1846, he married Permelia Snyder.  In the early spring they started for the Rocky Mountains in the company of President Brigham Young.  They traveled quite peacefully until they reached Council Bluffs, Iowa.  While preparing to continue their journey to the West, Captain J. Allen of the U.S. Army came with orders to recruit 500 young able-bodied men to form a battalion to cross the continent to take part in the war raging between the United States and Mexico.  Although the saints had been cruelly persecuted before leaving for the West and had been refused government aid, President Young told Mr. Allen he should have his men, thus the Mormon Battalion was formed.

Meltiar asked permission to take his brother Orin with him, as he felt a responsibility for taking care of him after their mother’s death.  Orin was only sixteen years old at the time, but was of a large build.  He was accepted, even though he was one of the youngest members to go.  it was aid that he was taken as a bugle boy.

Within three days, the army of men was organized.  Meltiar was mustered into service on July 16, 1846.  Meltiar was assigned to Company “C” and was put in charge of one of the supply wagons and of preparing food for his men.  It was and extremely hard march which required great inner resources of both man and beast.  Meltiar watched his supplies carefully, putting away that which was not used, and saving drippings from whatever he had.  Through his great foresight and careful planning, he had supplies left when others had exhausted their supplies, and was able to help feed the rest.

Many times the battalion ran out of food, not because the Government did not supply food, but the wagon trains were not able to haul food through difficult terrain.  At the Colorado River members of the battalion built rafts and floated supplies.  the raft stuck in the sand and the supplies were lost causing a shortness of food.

It was not hard to understand how one so young as Orin found the journey almost too much to bear.  The arduous and constant marching, the difficult tasks they were called to do, along with the scurvy which was so prevalent among them, left him very weak.  The time came that it was impossible for him to stand on his feet, and then his brother, Meltiar, and a good friend, one on each side of Orin, assisted him on the march so that he might not be left on the trail.

Finally, his condition became so serious that the attention necessary was detaining the company, and the commanding officer gave orders for Orin to be left by the side of the trial to die.  The company moved on without him, but that night after camp had been made, his brother and another faithful friend returned and carried him into the camp and attended to his needs as best they could.  The next day he was left again by the wayside to die, but as before, after encampment was made his brother and friend returned to his side and brought him again to the camp.  For several days this drama was staged until the commanding officer, seeing the determination of Orin’s companions to save him, offered his horse so that Orin might be strapped upon its back and carried along with the company.  Orin survived and was among those who raised the flag at San Diego when the battalion arrived.

When Meltiar and his younger brother, Orin, were discharged July 16, 1847, after the long and perilous march to San Diego, California, without engaging in any military encounter, they returned to Winter Quarters.  Meltiar found a son had been born to him during his absence.

On July 4, 1849, with food supplies replenished, wagons ready, and spirits hopeful, Meltiar and family crossed the Missouri River and once again journeyed toward the valley of the mountains.  For three months they traveled, meeting with many hardships and trials, yet all remained true and faithful, ever trusting in the goodness of the Lord.  Just before October Conference, 1849, they arrived in the Salt Lake Valley.

Meltiar took up farming in Bountiful, Utah, where he made his home for a few years.  He had married his second wife, Mary Ann Ellis, on 6 May 1856, which gave him two families.  With his wives Meltiar was called to go to Carson Valley in 1856 to establish a settlement and preside there.  It was here that John Henry Hatch was born to them July 22, 1857.

In the fall of 1857 Meltiar and his family were unexpectedly called back to Utah on account of Johnston’s Army.  He sold his home and property, but did not get much for it.  Meltiar spent the winter with his family in Lehi, Utah, and then moved to Snyderville in 1859.  He hired out to work for his father-in-law, Samual Snyder, who owned a sawmill.

That winter they were all snowed in.  The snow was up to the top of their cabins.  They had to make steps down into the barns and make trails to get the horses and cattle out, so they could feed and water them.  Normally they took most of the livestock to Samual Snyder’s ranch on the Jordan River, near the Decker farm.  In the summer they took the livestock back to Parley’s Park because of choice pasture land.

Meltiar always went hunting on Saturday afternoons, often taking his boys with him.  They used to trap for coyotes, wolves and foxes.  One time Meltiar even caught a wolverine.  They would then sell the furs and to Joseph E. Heywood, the hat maker.

In the fall of 1862, Meltiar moved his family to Salt Lake City for October conference and they planned to remain there and put the children in school that winter.  At conference Meltiar and his family were called to go help settle the Dixie Mission and surrounding area.

With much difficulty, they reached their destination, Santa Clara, on New Year’s Day, 1863.

The next spring they moved three miles from Santa Clara, near where the Indians lived.  they moved there to get summer range for the sheep and cattle.

Weltha Maria Hatch, the eldest daughter of Meltiar and Permelia, writes this firsthand experience of some of the trials and hardships her father experienced in the various places he was called to go.  “The next spring father went about three miles up the creek and settled some land.  he built a one-room house with a willow shade out front.  We really though we were well off; none had better.

“The cattle were taken to the Mountain Meadows for pasturing….We worked hard to build another home and have something to live on.  My father raised wheat and vegetables and sheared the sheep.  Then mother washed the wool, spun the yarn, colored it and wove the cloth.  Then she cut and sewed all out clothes by hand.  she made everything the men wore:  shirts, gloves, socks, mitts, pants, and even their suits; everything except their shoes.  She also made everything the children wore.  She made leather jackets and straw hats.”

At the semiannual conference of the church, Monday, October 7, 1867, another call came to Meltiar and his family to go to the Western Valley.  Weltha has a good first hand account of this mission experience as she writes:  “A call came to go west and help in settling some small valleys there.  We went to Eagle Valley.  it was the springtime of the year.  Father took the boxes from the wagons and set them on the ground and built willow shades over them for us to live in while he bought logs from the mountains to build a house.

“Along with the call to settle in Eagle Valley, father was again made bishop there.  We were permitted to remain only a short time as in the fall of 1869 the line was drawn and it was learned we were in the state of Nevada, not Utah.” (1)

Meltiar went to St. George to discuss with President Brigham Young about their situation.  President Young advised Meltiar to move back to an area on the Sevier River near the forks of Mammoth and Asay Creeks, as there would be good range for their sheep, cattle, and horses which they had acquired while living in Dixie.  Weltha writes about their move from the Muddy Mission:  “Then came another move.  My father, Meltiar, having two families, went with the second wife, Mary, and her family and my mother’s boys to drive the horses, sheep, and part of the stock as they moved to Panguitch.  The snow fell deep in the mountains that winter, so deep that father could not return to get us.  That was a winter never to be forgotten.”

In 1872, following his release from the Muddy Mission in Nevada, Meltiar set up a water-powered sawmill eight miles up the Mammoth Creek, and built two frame homes, one for Permelia, his first wife, and the other for Mary Ann, his second wife.  They were comfortable and modern homes for both of his families.  Permelia’s home was in Panguitch, but Meltiar spent most of his time at the ranch.  He became manager of the Panguitch Co-op cattle herd.  The area was called the Co-op Ranch.

Eventually, other settlers came.  The land was surveyed and irrigation ditches dug.  Before other public buildings were constructed, the first school was in the Hatch home, and Abraham Workman was the teacher.  Church services were also held in Meltiar’s home.  Meltiar’s ranch site later became Hatch Town, about one mile south of the present town of Hatch, Utah.

Having two wives, Meltiar left a large posterity of nineteen children. As promised in his patriarchal blessing, all are inclined to believe in the principle of the gospel.

Meltiar died at his ranch July 8, 1895, following a series of strokes which finally proved fatal.  At the time of his death, he was a member of the high council of the Panguitch Stake, active in the performance of his every duty, faithful always in teaching the gospel to his family.