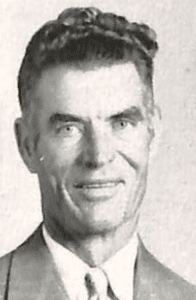 WAYNE H. HINTON, 84, a Life Member of the Hurricane Valley SUP, died at his home in Hurricane on May 16, 1990. He was born in Abraham, Millard County, Utah. He came to Hurricane in 1906 with his parents who were among the first 110 families to settle in Hurricane. He was well educated and had received a Master’s Degree from the University of Utah. He taught school in Washington County for 38 years. He had served in the Utah State Legislature, the Hurricane City Council and also as mayor of Hurricane. He helped develop the beautiful Hurricane Heritage Park. He gave many histories at SUP Meetings and was an outstanding historian. Wayne was active in the LDS Church having served as a ward clerk, Zion Park Stake Presidency, High Priests Quorum group leader and as an ordinance worker in the St. George LDS Temple. He is survived by his wife Jean, whom he married June 9,1939 in the Manti Temple; 1 daughter and 2 sons and 22 grandchildren and 11 great grandchildren.